« Wyrmwood - Road of the Dead review 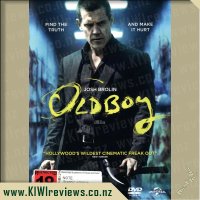 Although his life is already in a downward spiral, things get much worse for advertising executive Joe Doucett (Josh Brolin) ; while drunk one night, Joe is kidnapped and thrown into solitary confinement in a bizarre, hotellike room. For the next 20 years, Joe suffers unimaginable torment, but the motive and identity of his captor remain unknown. When he is inexplicably set free, Joe emerges with one goal: to find the person who stole two decades of his life.

After watching "Avengers 2" I was intrigued to see what other films Elizabeth Olsen had been involved in. and I found "Oldboy". Watching this film, I near enough immediately took a disliking to the main character. The arrogance and cockiness made me dislike the film, so when he was near enough immediately put into confinement, I was pleased, but unfortunately had to sit through him in his efforts to escape, alleviating boredom, and eventual "rehabilitation".

After being randomly set free, the movie finally starts to get interesting. It delves into his past, as he tries to track down his captor, inevitably getting hurt along the way, and having to recover with the help of a young nurse (Elizabeth Olsen), and repeating those steps for a while until the big reveal at the end.

And boy, that ending was quite unexpected. I know I should have expected it, but the level of convolution and planning surpassed anything that I had expected. It was also rather disturbing and well I wasn't prepared for it. It was brilliant, but brilliantly horrible.

Would I watch it again? No, I probably not. The pace was slow, and I did not enjoy Josh Brolin's performance at all. But viewing it for a first time, it had me intrigued by the end.

Angelenos Doug Billings and Tracy Garner are about to get married. Two days before the wedding, the four men in the wedding party - Doug, Doug's two best buddies Phil Wenneck and Stu Price, and Tracy's brother Alan Garner - hop into Tracy's father's beloved Mercedes convertible for a 24-hour stag party to Las Vegas.

Phil, a married high school teacher, has the same maturity level as his students when he's with ... more...