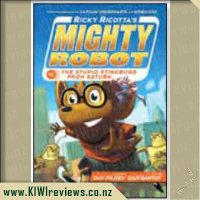 Ricky's family is headed to Cousin Lucy's house for lunch. How boring. Ricky and his Robot are hoping to have a little fun with Lucy's pet Jurassic Jackrabbits, but when they get there Lucy makes them play princesses with her instead. What could be worse?

An invasion of Stupid Stinkbugs from Saturn, that's what. Smelly Sergeant Stinkbug has arrived on Earth with a plan to kidnap its ruler, and Princess Lucy fits the bill. Now it's up to Ricky and his Mighty Robot to plug their noses and send those stinkers back into space.

I asked to review this as it looked like the kind of story that my kids might be into, stink and bugs are two things they go crazy over.

I was taking my four year old to the doctors as she has been rather under the weather and I decided to take it in with me for something to do while we waited, but my four year old requested that I read it to her. Before I even started reading it she was asking questiongs galore about what was happening and I had to remind her to let me read it to her.

The chapters are nice and short so I know that this will be easier for the kids to read when they're a little older but for now the pictures do a great job at telling the story without the need for any words which my older two love looking through. The story was nice and basic, though the kids obviously have VERY deaf and blind parents (and neighbours etc.) since no adults came on the scene, but it fits well with my sons love of imagining that he's off saving the planets (or planets, thanks Doctor Who ;) ). My four year old loved the story and straight away was asking for the other books in the series.

A fun hit for the kids and I'll be keeping an eye out for the rest.

My son (7.5 years) loves Ricky Ricotta and his Mighty Robot and he's just started reading them independently with very little help or encouragement from me.

The books follow a very simple formula - good guys, bad guys, action and friendship - there's never a dull moment which really helps to hold my son's attention. This story follows Ricky and his Mighty Robot and their fight to rescue Ricky's cousin and protect Earth from the invading Sergeant Stinkbug and his stinkbug army.

I am so glad that they decided to remake these books in colour - the bright cartoon illustrations and glossy pages really add to the story and make everything so much more interesting to look at - definitely a plus when marketing books for a younger demographic. The inclusion of comic strip style pages just adds even more interest and relieves some of the pressure of continuous reading while the short chapters break the story up into manageable chunks.

My son read this book over a couple of days and I was so excited for him to voluntarily pick up a book and read it all by himself - he's really good at reading but it's a very special book that can hold his attention enough that he'll read it himself and I'm sure he'll be reading this book over and over again.

It is a story that begins with a vivid depiction of the decline of the Roman Empire and which, down through the years, shows how one woman's determination to protect her daughter has such frightening consequences for mankind's future ... more...