« I'll Be there review 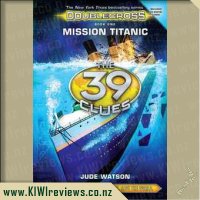 Disclosure StatementFULL DISCLOSURE: A number of units of this product have, at some time, been supplied to KIWIreviews by the company for the purposes of unbiased, independent reviews. No fee was accepted by KIWIreviews or the reviewers themselves - these are genuine, unpaid consumer reviews.
Available:
April 2015

Follow the Leader
At only seventeen years old, Ian Kabra is head of the Cahills, the most powerful family in the world. He has presidents on speed dial, generals at his beck and call. Ian knows he's an ideal leader and the only man enough for the job. There's just one small problem: He's already messed up big-time.

A Cahill from the past calling himself the Outcast has risen to challenge Ian with an impossible test. The Outcast has re-created four of history's greatest disasters and dared Ian to stop him. If Ian and his allies can't decipher the Outcast's hints in time, innocent people will die. Ian's only chance to beat the Outcast is to track down his former allies, Amy and Dan. But finding Amy and Dan will demand from Ian an impossible sacrifice...

So, here we go again with yet another 39 Clues series. I got a bit of a hint that a new series was coming in the last book of the "Unstoppable" series, but I had no idea what would happen in it. This book was quite interesting, rather than Amy and Dan being the main focus characters in this book, it was instead it was the Lucian Ian Kabra who seemed to be the nucleus of the story. I thought the story itself was rather interesting, and revolved around a planned disaster involving a replica of the well-known ship "the Titanic".

It has also introduced yet another nemesis that has managed to turn most of the Cahill family against our group of heroes, except this takes a small paragraph out of the original story, with the so-called "Outcast" being a member of the Cahills themselves! I loved how the story not only focused on the group of Cahills trying to figure out what disaster the Outcast was planning in time to stop it using only a riddle which had been made quite misleading, but it also focused on the lives of the characters themselves, including what I believe to be a blossoming relationship between Ian Kabra and a rather new character Cara Pierce.

This is something which I believe strengthens the story and gives it a bit more substance, after all, the characters have already been through so much, so it only makes sense that some of what they feel about being in this endless loop of danger they've been in should start being brought in. What I have found most interesting about the story is that the riddle which the Outcast gave to the Cahills made sense to me at first, but as time went on it actually made me question my own belief about the plot of the book, so it felt as it I was being brought along on the ride with the characters themselves, which allowed me to get drawn further and further into the book.

I hope that this IS the last series of the 39 Clues story, as it has gone on for 4 series so far, and the stories are getting a bit repetitive, and yet I am still impressed that the author has managed to still add a bit of uniqueness to the book, which has still captivated me somewhat. Overall, I think this is a great book, yes, the 39 clues series is stretching out a bit longer than I though, but I have not gotten completely bored of it yet.

The premise behind the book is fantastic, unfortunately the exercution was not done that well. Maybe if it had been done as an adults book it would of been better, edge of your seat kind of stuff but I found this failed to get my heart racing. It had so much potential but it just never reaches the spot. I found even at the somewhat exciting parts my mind started to wander and I could put the book down and not think about it again until I picked it up again. The chapters where nice and short and got to the point, the characters where rather simple and I guess there lied the problem there was no real complexity to it.

It has been widely speculated that rich and famous familes rule the planet. This book looks at that and expands on it. When the new leader of the most powerful families is taken over by mutiny he must solve four puzzles/tests to prove that he is worthy. Originally the leader was chosen by sitting 39 tests but this is cut short to only four. He is only seventeen and the elder members of this elite family chain now want the power. Really an awesome plot but like I said just does not reach that level you expect.

The writing was basic - but I guess it is aimed for younger children. But even some of them I feel will not be revited like they should be. I will definitely be keen to read the rest of the series as would like to know how the four tests pan out. At times I felt like there must be a book before this one it felt like I was missing things and looking into things deeper there is a multitude of books written by various authors with different catagories. This is the first book in the Doublecross series.

Also on a side note you receive six game cards that you can play in your very own mission. Rather cool the set up and how you choose your own name. I also loved having to turn to selected pages and typing in the assigned word. Felt like a real spy. Had a play around on the site but think will let my daughter play the game. An interesting spin on a book think more books should follow suite.

THE PREDATOR IS NOW PREY - WILL HE SURVIVE?

Wade Hanna emerges childhood from the unlikely depths of a Louisiana swamp to a life of fast cars in the Big Easy.

His youth is fraught with unwelcome misfortune and unsuspected servitude as an undercover operative.

To find sanctuary he joins the Navy submarine service only to find another silent sanction in his path.