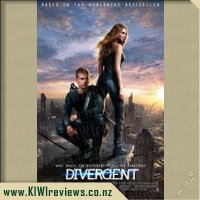 Tris Prior (Shailene Woodley) lives in a futuristic world in which society is divided into five factions. As each person enters adulthood, he or she must choose a faction and commit to it for life. Tris chooses Dauntless -- those who pursue bravery above all else. However, her initiation leads to the discovery that she is a Divergent and will never be able to fit into just one faction. Warned that she must conceal her status, Tris uncovers a looming war which threatens everyone she loves.

This is one of those films that has been on my watch list for months and I had just never felt enough interest to put it on. Recently though, I read the first book without planning to (there was nothing else interesting to read, that I could take home from work with me) and so, having offered to build a model house kit, I decided to put this on. Most of the cast were new to me, though there were three big names that I recognized, even though they had small roles, they all did well. Shailene did well as Tris but beyond that, no one else really stood out for me as someone I'd like to see more work from. I did find that I didn't like the actor who played Four, at all, he felt like such a bad fit for the role.

When it comes down to the plot, I already knew what would happen, so there were no twists, new information or surprises to be had. I did find, that I really didn't enjoy the film, the book, whilst an easy read, packed so much more into it than came across in the film, and they easily could have followed the book better. There isn't any real tension between those wanting to join the faction, there is no real concern over Tris being a Divergent and there was almost nothing when it came down to why they wanted to eliminate Divergents and change how things were being run. For me, the climax meant nothing, there was no build up of tension and I simply didn't care about the characters.

I know they made all the books into films, but this one was such a let down that I won't be bothering to watch the others when they come back on whatever streaming subscription I have unless I have nothing else to watch.

The biggest craze at the moment seems to be making teen trilogies into big budget movies. The Maze Runner, The Hunger Games and my favourite Twilight are some of these franchises. Where as the first two movies I don't feel explained enough and had to go to the books to fully understand the concept, I found Divergent very simple to follow and seemed to pick up the gist of it really fast.

Thankfully this is not really a doom and gloom movie where people have to be sacrificed for the human race to continue, well not initially at least, instead it's a pretty cool idea - you are split into different factions which best represent your personality and there lies your career and your future. But with Tris she will never fit into just one category and instead finds out that she is a Divergent - a secret that must be kept for the sake of her life.

I found the casting to be pretty bang on and the story not a bad one, but then again I do like romances among chaos. It was also good to see that the fighting spirit won in the end and that you should never give up which is a very important rule to learn. Like most movies recently it is very obvious what was going to happen but it doesn't take anything away from the story and I found I rather enjoyed it. It is also not as dark as the other two movies/books so I didn't feel dragged down by it.

All and all besides Twilight this is definitely one of the better teen aimed movies and I am keen to see how the series will end. Thankfully, like the rest it is a little far-fetched to ever eventuate into real day terms but it is fun to see how being controlled in a futuristic world could pan out. This series has been floating around the social networks a fair amount recently, with the release of the second installment, and several suppliers have been offering competitions for copies of the films and books, asking for what faction you would choose. This constant question of where my theoretical alliance would fall piqued my interest.

One of the issues with adapting book series to the silver screen, is that with a novel it is easier to ignore issues or omissions with the plot. Once put into the media form where everyone can visually see the world without the ability to use our own interpretation, the viewer begins to question some aspects. Such an issue revolves around what you can and cannot do. For example, if you choose a different faction, to that with which you were brought up, you can no longer speak with your family. Such an idea of the Dauntless' "police" force not being able to go to certain areas or speak with certain people seems an inefficient way to run a police force. Also, as would be expected people from factions having children, and raising them in their factions seems fine, until you are forced to consider people how a child would be brought up in the Dauntless faction.

But regardless of the sometimes confusing faction system, it does become comparable to historical class differences in the human society, and thus makes for interesting considerations when thinking about what is acceptable for control, and for peace. The film felt similar to Hunger Games in style, though the action varied; jovial in parts, but more serious in nature later in the film. The film is definitely shot in a way that focuses a lot on the drama and emotional journey of the story, with an inevitable romantic interest weaved into the plot.

Despite the many holes I could pick in the "faction scheme" I did enjoy the film, and would certainly watch it again in the future.

THE BOOK OF LIFE, a vibrant fantasy-adventure, tells the legend of Manolo, a conflicted hero and dreamer who sets off on an epic quest through magical, mythical and wondrous worlds in order to rescue his one true love and defend his village.