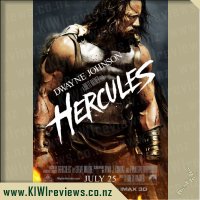 Though he is famous across the ancient world for his larger-than-life exploits, Hercules (Dwayne Johnson), the son of Zeus and a human woman, is haunted by his tragic past. Now, he fights only for gold as a traveling mercenary, accompanied by a band of loyal followers, including Amphiarus (Ian McShane) and Autolycus (Rufus Sewell). However, when the benevolent ruler of Thrace and his daughter seek his help in defeating a savage warlord, Hercules must find the true hero within himself once again. One of two Hercules movie to be released in 2014, you would expect it to be quite a challenge for one film to dominate over the other. The Hercules origin story is quite well known, so to be able to provide something unique would be difficult. This film, however manages to capture that spark of originality. The simple change that makes this achievable is the switch from a "solitary hero", to a "strong leader of a group". This alteration makes the story ultimately more believable, and plays upon the idea of how myths are created and upheld.

Dwayne 'The Rock' Johnson plays the lead role of Hercules in this film, and in my eyes, is a better fit than most previous Hercules. Any person that had spent such a significant portion of his life fighting and travelling across the lands would indeed have darkened skin, so it was great to see a more "diverse casting choice. Though the majority of the remaining cast were significantly white of skin, there was still enough diversity for Hercules to not appear out of place.

The action scenes were done well, and I enjoyed how much peoples perceptions were a factor of what you were visually seeing. This film was enjoyable, and far superior to "The Legend of Hercules" which was released earlier in the year. This style and genre of film suits Dwayne Johnson, and I look forward to a movie marathon of myths (The Mummy, The Scorpion King, Hercules...)

The House of Magic (also known as Thunder and the House of Magic) is a 2013 Belgian-French-American animated fantasy-comedy film on DVD, directed by Jeremy Degruson and Ben Stassen.

Jeremy Degruson and Ben Stassen direct this animated family comedy featuring the voice talents of Murray Blue, Kiefer Sutherland and Ewan McGregor. When housecat Thunder (Blue) is abandoned by his owners he fights to stay safe on the strange and lonely ... more...