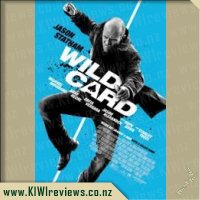 A bodyguard (Jason Statham) goes after the sadistic thug who beat his friend, only to find that the object of his wrath is the son of a powerful mob boss. With lethal skills and a gambling problem, he gets in trouble with the mob, he has one last playâ¦and it's all or nothing.

Blinded By The Light This was a rather weirdly laid out movie. Transitions and change of scenes were displayed out of order, and gave the film a strange disjointed feeling. This is probably the first Jason Statham movie that I haven't really enjoyed. It has the same fighting style that we have come to love, but the characters lacked credibility. None of the characters would have received more than 10 minutes of screentime (except for Jason Statham and Michael Angarano), so the film was filled with fleeting minor characters, and many irrelevant plot points.

While I did laugh at the beginning when Statham's character Nick was listing his "qualifications", and I enjoyed the "he can kill with any common object" theme, the script felt lazy and fell flat. There was no real plot, no real danger, and most exciting plot points were resolved without the promised conflict. I had nearly watched the entire film before I realised that I had no idea what the point of the movie was. I had no idea of the end goal, no idea whether this was film about gambling, or a film about organised crime.

The final battle was short, anticlimactic, and disappointing. This film did not live up to my expectations for a Jason Statham film. I hope he does not become the new Nicolas Cage.

Robert Redford stars in The Old Man & The Gun, a beautifully crafted film inspired by the true story of career criminal Forrest Tucker. Following a daring prison escape, Forrest embarks on a string of bank robberies that confound the authorities and enchant the public.

Wrapped up in the pursuit are detective John Hunt (Casey Affleck), who becomes captivated by Forrest's commitment to his craft, and Jewel (Sissy Spacek), who ... more...