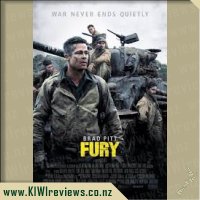 In April 1945, the Allies are making their final push in the European theater. A battle-hardened Army sergeant named Don "Wardaddy" Collier (Brad Pitt), leading a Sherman tank and a five-man crew, undertakes a deadly mission behind enemy lines. Hopelessly outnumbered, outgunned and saddled with an inexperienced soldier (Logan Lerman) in their midst, Wardaddy and his men face overwhelming odds as they move to strike at the heart of Nazi Germany. I always enjoy a good war movie. I would like to think that it isn't a love of death and killing that makes me enjoy these films, but rather it helps me to appreciate the sacrifices that were made by people around the world, to protect their nations from an invading threat. This is what we get with 'Fury'; a film that follows the 3rd tank battalion, who sustained high losses and was reduced to one tank, before the film even started.

The opening sequence sets the atmosphere for the rest of the film, an atmosphere of allied forces pushed to the edge of survival, outflanked, and outnumbered, behind enemy lines. The film provides a reminder of the losses that are a consequence of war; not just the soldiers from both sides, but the civilians too become victims of both sides of the war.

'Fury' was full of tension throughout the entire film, even during "downtime" frustration and anxiety ran high, and the effects were visible. I think one of the reasons why I enjoyed this film is that it didn't show America as the force that ended the war, as many WWII films aim to do. It shows soldiers that were ill-equipped for the job, with inferior armoured vehicles and a lack of supplies, fighting tooth and nail, willing to die for their cause. It doesn't show a whitewash, where the Nazis are wiped out by a relentless US army. It shows a battle, where the Nazi troops are fighting for their homeland, and the Allied troops just want it all to end.

Comradery and family are very significant themes in this film. The idea that the teams stick together no matter what, They live together, they die together, their place is on the battlefield with their tank.

It reminds me of the 'Band of Brothers' in regards to the production quality. It has all the grittiness, all the death, the unexpected, the highs, and the lows, It doesn't pull any punches. It exposes the cruel reality of war. War doesn't just affect the soldiers, it impacts everyone. But it is also portrayed in with a bright clean filter. It provides the viewer with a up close view of the war, without getting dirty. I could have watched it for hours more.

Goaded by his buddies, a nerdy guy who's never "done the deed" only finds the pressure mounting when he meets a single mother.