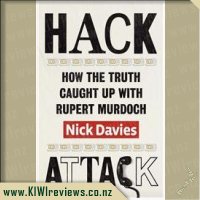 At first, it seemed like a small story. The royal editor of the News of the World was caught listening to the voicemail messages of staff at Buckingham Palace. He and a private investigator were jailed, and the case was closed. But Nick Davies, special correspondent for The Guardian, knew that it didn't add up. He began to investigate, and ended up exposing a world of crime and cover-up, of fear and favor--the long shadow of Rupert Murdoch's media empire.

The Pirates Next Door
Rating: 8.3

I saw the trial of Murdoch and his newspaper empire in bits and pieces on the evening news. I didn't quite understand what was going on. Only that there were celebrities and important people testifying against Murdoch and charges of phone hacking made. I also clearly remember seeing the News of the World newspaper's final cover-page. It seemed amazing to me that such an iconic newspaper was finished in the wake of the scandal. Yet there it was.

This book is the story behind those charges. Davies is a journalist from the Guardian. As such, he has lived in the same world as those paying for the services of phone hackers, or doing the deed themselves. He has mixed with just about everyone who is a part of the story, in a wider context too. This allows him to weave a pretty interesting story. He gives the characters behind the story life, and some insight into the possible motives. He talks through gathering his sources, having informants, redacted documents. It's all pretty cloak and dagger stuff.

While it is written in such a way, that you feel like you should be a little shocked that this all happened. A big part of me is not that surprised. I guess that this type of behaviour had been hinted at a couple of times and I had seen some of the trial coverage. But also I always figured that if a photographer was willing to hang out of a tree over a wire fence for the perfect naked shot of a celebrity then surely the press would stop at nothing for the "truth".

This is a story then, of the press pushing their freedom a bit too far. Before reading this book and seeing the way the press got some of these stories over the years I always wondered what kind of "close friend" celebrities and people in power could have, if they always blabbed to the papers. After reading this, I will question any story that suggests that a "close personal friend" has been talking to a journalist about someone. Before the phone hacking saga, it was almost certainly a close friend being hacked and/or backmailed.

This is a good solid book, which kept me reading. It has a few photos from the trial and the story in general, in a similar format to a auto-biography. I'm recommend this book to anyone interested in learning more about the phone hacking that went on during that time.

The galaxy has seen great empires rise and fall. Planets have shattered and been remade. Amongst the ruins of alien civilisations, building our own from the rubble, humanity still thrives. And there are vast fortunes to be made, if you know where to find them.

Captain Rackamore and his crew do. It's their business to find the tiny, enigmatic worlds which have been hidden away, booby-trapped, surrounded with layers of protection - ... more...