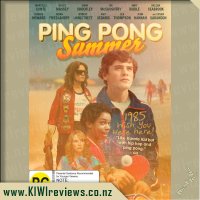 The year is 1985. Rad Miracle is a shy 13-year-old white kid who's obsessed with two things: ping pong and hip hop. During his family's annual summer vacation to Ocean City, Maryland, Rad makes a new best friend, experiences his first real crush, becomes the target of rich, racist local bullies, and finds an unexpected mentor in his outcast next-door neighbour. Ping Pong Summer is about that time in your life when you're treated like an alien by everyone around you, even though you know deep down you're as funky fresh as it gets.

1985 is the year I was born. But the movie sets a great idea of what the world use to be like without all the technology we have now days, no interest, no kids sitting inside playing xbox and playstation. Its all about outside and doing things you like, holding a stereo up on your shoulder . Rad, enjoys ping pong and hip hop, he is shy and doesnt have friends until they go on holiday for the summer.

While on holiday he seems shy, out of it and not really sure what to do with himself until he meet another kid, he shows him things around that he can do including an area to play ping pong. But as we all grew up and the bullies came out, rich kids played a big part in the bullying in this movie. Rad gets a crush on a girl, gets help with his ping pong to play the bullies at the game. Rad has all the encouragement from the town which helps him get into his game.

This movie was neat but not something I would watch over and over again, I wasnt really into it. But the setting and look into a teens life is pretty well shown. It is a good movie and it does deserve a watch at least once. There are parts to give a good laugh at, so what are you waiting for give it a watch.

Nostalgia is a powerful drug... we all fall victim to it at least once in our lives, and this movie threw me back to my teenaged years. New Zealand in the mid-80's was nothing like America at the same time, but I spent some time in the States around then and recognise the style, the vibe and the whole gig baby... it was all still a little groovy after the 70's, but the buzz was starting the fade at the edges, man.

A typical tale of a lone outcast finding a posse and an authority-figure in an unexpected place - think Karate Kid with ping pong paddles instead of waxing and painting - the movie was an unfortunately accurate representation of the era. Consumer electronics were just becoming interesting, but were still basic and bulky. Boys carrying a boom-box and playing donkey kong while wearing too-tight shorts and singlets, headbands and sweatpants for the girls, was all the rage and everyone was desperate to stand out as the next big swinger. It was a strange time to be a teenager, really. Everyone was feeling pressure, but couldn't say what or where it was coming from. There was a lot of elitism from those with 'old money' who looked down on those with blue-collar backgrounds, and it often manifested as bullying, intimidation and outright abuse. It all stemmed from fear, of course - fear of watching 'those without' slowly become 'those with' and somehow diluting the purity and status of having inherited wealth.

This movie was nothing amazing, to be honest, but it was a fairly good snapshot of the times and it reflected that, while the world was on the cusp of a revolution of sorts, no-one really knew it and so they just got on with their lives. People of the time took holidays that were, to a large degree, actually relaxing and separated from their daily lives - unlike today where the world is only ever a few keypresses or a few taps on your smartphone away, meaning you never really leave your life behind unless you go Luddite and switch everything off. Actually, that sounds really quite appealing.

Overall, though this is not a movie I will probably watch again, and couldn't find anything much to rave about, it was worth watching at least once if for no other reason than to see a pretty good performance from Susan Sarandon. Susan is most well known for 'crisp and clean' roles, so to see her playing a ratty, tough-as-nails, DILLIGAF persona was quite refreshing... and the character names were a cheesy laugh. Alas, more so than the story itself.

Caroline, a live-in nurse, is hired to care for an elderly woman's ailing husband in their home - a foreboding and decrepit Gothic mansion in the marshy backwoods just outside of New Orleans. Intrigued by the enigmatic couple and the dark and mysterious surroundings, Caroline begins to explore the old mansion.

Armed with a skeleton key that unlocks every door, she discovers a hidden attic room that holds a deadly and terrifying ... more...