« A Walk Among the Tombstones review 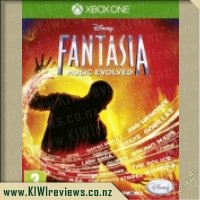 In Disney Fantasia: Music Evolved, players enter the magical realms of Fantasia, selected by the legendary sorcerer Yen Sid to hone their musical and magical prowess as his new apprentice.

Having played other Disney Xbox games I had high hopes for this one. I was not disappointed. The concept seems really strange and when you try and explain it people are still very sceptical as to whether it would be any good.

Taking it's story line from the Disney movies Fantasia, and more recently Fantasia: 2000, you are the sorcerer's apprentice, your mission is to save the realms from the noise. To achieve this you must unlock various compositions within the game. This is aided by the extensive song library that includes classical music such as The Nutcracker, slightly more modern songs like SOS by the Who, right up to the current day with Royals by Lorde. You can also purchase song packs for party mode which includes songs such as Let It Go.

The entire game uses the kinect sensor, from the moment it loads you don't use the controller at all. It is also worth noting that it is a game that you can play sitting down so good for those with lower body mobility problems. You play as the conductor and conduct the music by hitting cues at the right time. There are sweeping motions, pushing, holding and trails. Both hands are required to achieve a good score. When you first load the game you set the timing to your speakers so the lag should be non-existent and if it ever changes it is a quick fix.

Each song has three different versions, the original and two other compositions, to achieve your mission you need to unlock all three of them. There are the realms that have been taken over by the noise and as you complete each one another world that isn't opens up. To "complete" the game you only need to clear the noise but each realm is well worth exploring on it's own, you can return once finishing to explore areas you have missed, as well as the songs to perform in each one there are mini compositions to be recorded as well.

My 6 year old daughter plays in party mode and has great fun, she isn't competent enough to score well enough to play the mission game yet but she completely understands it. My 9 year old son is currently trying to finish the mission so he can beat me. I would recommend this to everyone who loves to have fun and enjoys music. Be prepared to ache for the first few days as throwing your arms around uses muscles you don't usually use. As for those friends of mine who were unsure when we explained it to them, well they're off to buy their own copy after having a turn, if that's not a sign of a good game I'm not sure what is.

Set across three defining eras from 20 years of Sonic the Hedgehog video game history, the instantly recognizable environments of Sonic Generations have been re-built in stunning HD and are now playable in both classic side scrolling 2D from 1991, as well as modern 3D style found in Sonic's most recent adventures.

Each incarnation of Sonic in Sonic Generations comes complete with his trademark special move, Spin Dash and Spin ... more...