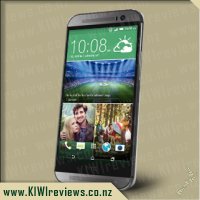 Disclosure StatementFULL DISCLOSURE: A number of units of this product have, at some time, been supplied to KIWIreviews by the company for the purposes of unbiased, independent reviews. No fee was accepted by KIWIreviews or the reviewers themselves - these are genuine, unpaid consumer reviews.
Available:
via Online Store and selected quality stores nationwide

NOTE: Some units may use the 2.3GHz version of this CPU.

It's not often I get a chance to really put a leading smartphone through its paces. That kind of testing takes at least a month if you want to explore how it works in a wide range of situations. Heck, in some cases it has taken over a week just to migrate all the data over from one to another... not so with the HTC One M8! Utilising a dinky little Android app, I was able to extract all the data, apps, settings, contacts, ringtones and personalisations off my Samsung Advance (PO)S and into the M8 in under 5 minutes via Bluetooth. For a 'first impressions' situation, I couldn't have asked for a more stunning start!

Naturally, when migrating across brands, a few adjustments needed to be made. Migrating from one brand-specific app to another brand-specific app required some tweaking of settings, but by the end of it I had my new phone working just how I wanted it within 2 hours, far FAR less than it usually takes. And to be fair, most of that 2hrs was spent exploring new features and options not available under Samsung's version of the OS, so if I had to nail down "time actually spent setting up the phone" I would have to point more towards half an hour tops, maybe 25 minutes.

Functionally, the M8 is quite the stallion compared to some of its price-peers. Yes, it's almost a year old - which is nearly middle-aged in tech-years - but it has aged well and is still a spry and productive member of the family. With it's quad-core processor, it seems capable of some advanced gymnastics in everyday use. Able to stream and play back High-Def 1080p video files with ease in a number of formats, play some decent games, and handle video recording and playback with ease. Not surprising when you consider that according to the Geekbench v3 benchmarks, this unit tops the leaderboard against all its peers and rivals by at least 6% - that's significant in this marketplace, but to a regular consumer it just means "more bang for your buck" in a very real sense, especially on the gaming front where the 3DMark benchmark app shows a 14% improvement over it's nearest rivals. Fruit Ninja, anyone?

We all know that since the introduction of "smartphones", phones aren't just phones any more - they are portable personal computing and multi-channel communications devices. Basically... what we all wanted when we first started watching Star Trek. The onboard camera setup is, for many in this social-media oriented world, a huge deciding factor... but don't get hung-up on the megapixel ratings. As HTC say, in low-light situations, bigger pixels is better than more pixels. This is why HTC introduced the UltraPixel technology... and while it may seem like a step backwards to have fewer pixels on the CCD sensor, these allow for a fairly dramatic improvement in low-light shots... great for those selfies at a concert or nightclub, or family birthday shots in dimly-lit restaurants. If you dig around in the camera app - which is far more than it first seems - you'll find all sorts of interesting and useful features. Some are fun, some are wacky, and a couple are just insane because they promise so much yet fail to live up to the hype.

Some of the fun features include the 3D mode where you can 'tweak' the perspective a little as though you had taken a couple of steps to one side or another - very useful if you *almost* got the perfect angle on that wedding cake but just missed the golden angle because Aunty Mary stepped up and got in the way. There is also the 'uFocus' mode, where the dual camera design really shows its oats. Using the secondary camera the M8 takes a type of stereogram or lightfield shot, capturing depth and perspective data that allows the software to give you the power to refocus the image on different subjects. Imagine Aunty Mary is standing a little way behind Uncle Tom, and she's got the most amazing look on her face as she's about to inhale a piece of wedding cake the size of a small kitten. Because the moment was fleeting, you whipped out the M8 and snapped off a shot, but the camera focused on Uncle Tom instead. Fear not! Bring up the photo in the Gallery, select the three-dots settings icon and choose uFocus mode. A tap on Aunty Mary's face and hey presto, she's now in focus and it's Uncle Tom who is blurred out into anonymity. However, be aware that the depth data is not pinpoint accurate, and if your scene has a shallow depth of focus, you'll find strange things happen. This puts the uFocus mode on the border between 'fun' and 'insane' for me - it has limited usefulness and is likely to prove annoying more often than miraculous. You should also note this 'magic' only works on a limited range of images - if you switch out of regular photo mode into HDR, macro, low-light or any filtered modes, you will lose that voodoo.

Yes, the user-facing camera *is* a higher resolution at 5MP than the front-facing one, but it doesn't have the UltraPixel low-light capability, or the depth-capture feature etc. However, in some situations - particularly where lighting is quite bright and there's areas of high-contrast - I found the back camera to be the superior unit. While infinitely more annoying to try and use for anything but selfies, if you can master the art of guesstimating your subjective field of view, you'll find shots from this camera to be crisper, cleaner, and far less prone to 'purple fuzzies' in areas of extreme contrast. Just forget about trying to do low-light selfies - ask someone to take the photo of you instead.

"But... it's a SmartPHONE... so how does it go as a phone?" I hear you ask... maybe. Well, the simple answer is "Just fine, really," but there's a bit more to it than that. Taking into account this phone has the "BoomSound" dual speaker system - giving fairly rich sound for a phone that will make watching movies a far more enjoyable experience than any other handset will offer you - it lacks a dedicated, human-vocal-range speaker for calls, instead switching the left BoomSound speaker into a secondary mode for calls. While this isn't too bad, you may notice some slight fuzzing of the sound, but it's got some good strength to it and you may want to turn the call volume down a notch if you don't have a hearing impairment. The almost-solid aluminium bodyshell doesn't seem to cause any significant drop in signal strength either, so you should get good coverage.

Speaking of the metal shell... battery usage! Out of the box, with default settings you'll be lucky to get through your working day without having to slap it on charge as you climb in the car to head home. This is actually fairly typical of the majority of medium- to high-end smartphones out there at present. Too many things going on behind the scenes leech away your phones go-go-juice. However, activate one of the built-in power saving modes, and you'll get a full day at the very least, up to two days if you really skimp on your usage and avoid too much WiFi and all gaming. Activate the panic power-save mode and the phone basically lobotomises itself and drops back to ultra-basic functionality. This will get you through the drive home with the ability to make basic calls, check your schedule, and a couple of other bare essentials. Of course, you can always ignore these and download a third-party power management app and tweak the performance to suit your needs. "So, what's this got to do with the metal case?" Good question... and the answer is heat. Heat is caused when your CPU starts to chug along for prolonged periods of intense use... say, if you are playing a graphics-heavy game while sitting on the bus or train. The metal case will get warm, then hot... and you'll feel it. You can accept that the case is dumping that heat out into your hand instead of allowing it to cook the circuits, or you can stop playing and give the phone a rest. Either way, I'm a fan of metal cases! If they can find a way to engrave it with micro-fins to enhance the cooling effect, that could make for some awesome performance enhancements in future designs!

Overall, this is the phone I desperately wanted when I first bought into the smartphone tech. I was happy with my old phones, that were just phones, and if you wanted you could have txts as well. Simple, easy to use, real no-brainer tech... then I had to buy into the hype and got myself a cheap model that had a tiny screen, crapped out more often than it worked, and utterly died on me within a year. After a couple of years bouncing around trying to find a phone within my price range that actually warranted the title "smartphone", I have finally found one that wears the crown comfortably. It doesn't make too many promises it can't keep, it does almost everything it promises, it's as easy to use as you could want without telepathy, and apart from some minor issues raised by introducing the depth-perception tech before it's fully matured, this is the phone I confidently see holding me through the next couple of years until something closer to a 'wearable' comes around. Considering it's now half the price it was a year ago when it first came out... it's a very good buy, they're still around!

UPDATE: After recently receiving and authorising the OS upgrade to Lollipop 5.0 the phone has stabilised beautifully and is now running a lot more efficiently. However, the "Face Recognition" unlock is now 10x more awkward to use, hardly functions correctly at all, and I have deactivated it in favour of a passkey system. Annoying, but a small price to pay for the feature boosts that come with Lollipop.

Unlimited possibilities - a camera for every scenario

The OPPO A9 2020 comes with a multipurpose quad camera setup, including a 48MP main camera + 8MP ultra-wide lens + 2MP mono lens + 2MP portrait lens. The OPPO A5 2020 is similar but swaps for a 12MP main camera. The new quad cameras are engineered to capture every ... more...