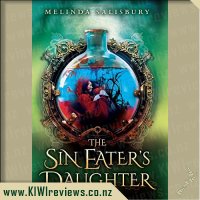 Disclosure StatementFULL DISCLOSURE: A number of units of this product have, at some time, been supplied to KIWIreviews by the company for the purposes of unbiased, independent reviews. No fee was accepted by KIWIreviews or the reviewers themselves - these are genuine, unpaid consumer reviews.
Available:
March 2015

Seventeen-year-old Twylla lives in the castle. But although she's engaged to the prince, Twylla isn't exactly a member of the court.

As the Goddess embodied, Twylla instantly kills anyone she touches. Each month, she's taken to the prison and forced to lay her hands on those accused of treason. No one will ever love a girl with murder in her veins. Even the prince, whose royal blood supposedly makes him immune to Twylla's fatal touch, avoids her company.

But then a new guard arrives, a boy whose easy smile belies his deadly swordsmanship. And unlike the others, he's able to look past Twylla's executioner robes and see the girl, not the Goddess. Yet Twylla's been promised to the prince, and knows what happens to people who cross the queen.

However, a treasonous secret is the least of Twylla's problems. The queen has a plan to destroy her enemies, a plan that requires a stomach-churning, unthinkable sacrifice. Will Twylla do what it takes to protect her kingdom? Or will she abandon her duty in favor of a doomed love?

Children's Atlas of the Universe
Rating: 9.8

I borrowed this book from a friend as it looked interesting but I found that it was confusing and really hard to read. The most unlikely romance kind of made it easier to read but the ending had me thinking "well who did she choose? " and the epilogue doesn't make it clear so obviously there is at least one book to follow this one - I might be tempted to read it to see what happens next as the ending is just not right.

The characters are well written, the fear from the people and the lonely feeling from Twylla as she tries to go on with her "destiny" and the guilt she feels. I had a serious dislike of the royal family and by the end of the book I knew why they did what they did but still disagree with their actions. There is also a lot to take in, the stories about the gods and the whole tangled history, not a big believer of legends like that.

I was tempted to put in a request to review this book but I am glad that I never did as it is just a bit too strange and although I like both fiction and non fiction books this one just left me wondering why anyone would want to read it.

When I was reading the blurb of the book it sounded like it was right up my alley but while it was enjoyable it was a bit different to what I expected. Being a young adults book I was expecting a quick and easy read however to begin with I found it a very hard read. However the second half of the book was a lot easier to read.

The first part of the story seemed to give you so much history and builds up the story it is very slow paced. While this is needed in a story it did make me want to give up on it a couple of times. I am glad I stuck with it though as I ended up enjoying it and would happily read a second on in the series.

The main character Twylla is well written and the story is told from her point of view but she has so much more potential than displayed throughout the book. I felt like the story was on the right track it just needed a little something more. I did find that I was drawn to her character all the same and her emotions and feelings really played on your own emotions.

I have passed the book on to my 12 year old niece to read and I'm interested to see what her feed back will be. She is an advanced reader so I think she will handle it fine but I would recommend the book to slightly older teens.

Phew! So I've finally finished this book and I have to say that it wasn't at all what I expected. What I expected was a young adult novel that I would breeze through in no time at all, instead, what I got was a book that at times was hard to push through but by the last hundred pages I just couldn't put it down. Twylla is surrounded by people but the lonliest person in the world as no one but the royal family can physically touch her, all live in fear of even just the brush of her finger. She was the daughter of the Sin Eater (who eats a feast at a funeral, each food or drink symbolizing a different sin, and quantity shows how great the sins were), yet is taken from that destiny and given another. But after four years of being sure of her role, everything is about to change.

Twylla is a very well written character and as we read from her point of view, her thoughts we see just how lonely a person she is, how conflicted and how unsure and afraid she is. There wasn't a moment during the story that I didn't believe in how she was feeling nor did her reactions feel inappropriate at times. There is a lot going on in this book, quite a bit of information to swallow, a lot of history is given but it all flows well. Depending on your tastes you may not like this book much, as Twylla is not a very active character, more that she is being swept down the river and simply trying to stay afloat, but I really enjoyed the book and whilst I wouldn't exactly say that I loved it, I certainly liked it enough that I will recommend it and keep it on my shelf.

A quick Google tells me that this is the first in the series, and I do hope more books happen, even if just one more, so I can get a full end to Twylla and her story, the good thing though, with this book, is that the ending is good enough that I'm not desparate to know what happens next, so I won't be crying in the corner if this is where the story ends.

It is the night of the hens' fancy dress ball, but there is a mystery guest - the handsom Mr Fox.

Will the hens discover his identity before they become chicken pie?