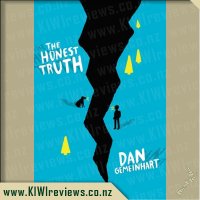 Disclosure StatementFULL DISCLOSURE: A number of units of this product have, at some time, been supplied to KIWIreviews by the company for the purposes of unbiased, independent reviews. No fee was accepted by KIWIreviews or the reviewers themselves - these are genuine, unpaid consumer reviews.
Available:
March 2015

In all the ways that matter, Mark is a normal kid. He's got a dog named Beau and a best friend, Jessie. He likes to take photos and write haiku poems in his notebook. He dreams of climbing a mountain one day.

So Mark runs away. He leaves home with his camera, his notebook, his dog, and a plan to reach the top of Mount Rainier--even if it's the last thing he ever does.

The Honest Truth is a rare and extraordinary novel about big questions, small moments, and the incredible journey of the human spirit.

The Last of The Spirits
Rating: 9.0

This is the best stand alone book I have read in a while for the simple reason that it created so much emotion in my mind the whole time I was reading. Which was a short period of time as I just couldn't put the book down. The blurb of the book drew me in straight away as it was suggested if you liked the fault in our stars this would be a book you enjoy and I also loved the fault in our stars. I find something compelling about books that have an emotional theme to them and although I dislike reading about kids being sick who wouldn't I want to find out that they will be okay.

Mark has cancer and his dying wish is to climb to the top of Mount Rainer so he runs away to live his dream. He is a strong character and has a lot of anger which I think is quite realistic for the situation he is in. As you are reading it is hard to believe you are reading about a 12 year old boy as he seems so much older for his age and the situation he is in would be one you would perhaps expect of an older teen or adult. Nevertheless he is just that a young 12 year old boy with his loyal companion Beau the dog.

I found myself so attatched to Beau as I read and I think if anything happened to that Dog I would of hated the book immensely, he went through so much and he meant so much to Mark I just couldn't bear for the dog to have died and there were times when it came close. In fact both Mark and Beau came close to death on many occasions which made it such a compelling read, the author definitely did a great job creating such a compelling plot I was left feeling so relived when I got to the end of the book and it shows that the book drew me in.

Jessie was also a very likeable character and she was well and truly Marks best friend it was interesting seeing her faced with the dillemma of keeping Marks secret when his parents were so worried about him. This book would open up some interesting questions in a classroom setting or even with your own teens about when it is suitable to keep secrets and not as Jessie was in an awful position trying to protect her best friends dying wish.

My 13 year old who is a huge fan of the fault in our stars also was engrossed in this book and found it very hard not to give the storyline away to me before I read the book. I would completely recommend it to any teen or adult who was drawn into the fault in our stars but be prepared for a very emotional read.

When I saw the cover to this book, it drew me in. The bold blue with the black of the mountain and the white clouds. The tiny figures on the top. The thing that struck me most, was that it reminded me a little of the cover of another book, "The Fault in Our Stars" by John Green. I haven't read that book yet. It's one of those ones that people recommend but the subject matter feels too much for me at the moment. That said, I picked up "The Honest Truth" and started reading it without looking at a blurb.

If I had looked at the blurb I might not have read the book at all. But I went in blind, which for me was the best. I just don't deal well with the idea of kids being sick. When you meet Mark in the book, things are moving at a fast pace. You don't really know how old he is, or what he is doing. I thought he was an adult at first, as he left the house. When there was a question of a parent with him, I thought maybe teenager but later I realised that too many people were enquiring about a parent. He was much younger than I expected, for someone going on this kind of journey.

As the story unfolded, there were many moments when the parent in me was so frightened for him, but what I really became invested in was the dog. I mean, there were times in this book when my heart caught in my throat and my chest hammered away due to the intensity of scenes, but it was the dog that I was most scared for. Maybe because he was pretty much the only friend who was right there. There was one sentence that made hot tears spring to my eyes without any warning, and that was "dogs die". With such simple sentences Gemeinhart weaves such complex ideas, searching, searching for the meaning of it all.

Around page 130 I thought, this is alright. I can stop here. I feel like I can walk away now and come back tomorrow. So I pottered around in the kitchen, cleaning up and making a hot chocolate. But then I found myself back on the couch reading "just one more chapter". Then every half chapter afterwards, always checking in with the people Mark left behind. Their fear and hope, and hopelessness. I needed to know, and that is why I finished this book in the early hours of the next day. It is fair to say, I lost track of time. What should have been a two - three day read for me, was gone in a matter of hours. And afterwards I struggled to sleep.

This book would be good reading for anyone who enjoyed the John Green book. I will be recommending it to those I know liked that book. I'm okay afterwards and I wonder if maybe I would be okay after the Green book too. I'm still not sure. This book leaves things open. It would make good reading for teens, there is a lot of big concepts that might not be easy for a younger child to read. It was a great read though.

Things move slowly in the village of Illthwaite, but that's about to change with the arrival of two strangers intent on digging up bits of the past the locals would rather keep buried.

Sam FLood is a young Australian mathematicain whose grandmother was dispatched from Illthwaite four decades ago, courtesy of the Child Migrant scheme. Migual Madero, Sam's fellow guest at the Stranger House inn, is a Spanish ... more...