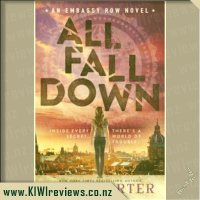 Disclosure StatementFULL DISCLOSURE: A number of units of this product have, at some time, been supplied to KIWIreviews by the company for the purposes of unbiased, independent reviews. No fee was accepted by KIWIreviews or the reviewers themselves - these are genuine, unpaid consumer reviews.
Available:
February 2015

Grace Blakely is absolutely certain of three things -
1. She is not crazy.
2. Her mother was murdered.
3. Someday she is going to find the killer and make him pay.

As certain as Grace is about these facts, nobody else believes her so there is no one she can completely trust. Not her grandfather, a powerful ambassador. Not her new friends, who all live on Embassy row. Not Alexei, the Russian boy next door, who is keeping his eye on Grace for reasons she neither likes nor understands. Everybody wants Grace to put on a pretty dress and a pretty smile, blocking out all her unpretty thoughts. But they can not control Grace, no more than Grace can control what she knows or what she needs to do. Her past has come back to haunt her and if she does not stop it, Grace is not the only one who will get hurt. Because on Embassy row, the countries of the world stand like dominoes and one wrong move can make them all fall down.

This was quite an intriguing read. It seems almost like the perfect series for M. Night Shyamalan to direct, because of the constant "twists"; the constant shocking finds and revelations. But it was definitely a good read. From a New Zealand-English standpoint the book is very well written with only a couple of sentences that seemed out of place. Beyond those two sentences where I placed emphasis on the wrong words in the sentence, it flowed very well, and was very easy to understand.

That being said, the plot was a little more convoluted, and variable. Every time you get your head around what is going on, something changes and you realise that that is no longer the case. Things that you have built your perspective on are a lie, and eventually you start to question everything; especially the first of Grace's certainties.

But it draws you in and introduces and large number of characters with varying skills and background. While only including the bare minimum of action scenes, there is a lot of secrecy, deception, politics, and suspense built into the plot. My only real disappointment is that it ends how it did; it was great to get a conclusion to what happened to Grace's mum, the book leaves you in the middle of the beginning of another story. A story that I want to be reading now.

Something about this book drew me in, so that I was helpless to stop myself from actually requesting it for review. I think it was a combination of the striking cover, with the dusky sky and the city that Grace is walking into. It looks exotic but also dangerous and exciting. The blurb on the back told me in not so many words that this was going to be a thriller/murder mystery. I don't always gravitate towards this genre but I was hooked in.

As I started to read, I found Grace to be extremely mixed up. Something that could easily be explained by the situation she is in, and the history of the last three years. You are in Grace's head for the most part though it is not written in first person. As it is a mystery the way it is written is quite good. Throughout the book I was asking myself who are our friends and who aren't.

From chapter to chapter, the answer to that question changed. There are a few romantic interests but because of Grace's focus these are treated quite different too how I thought they would be. People change in marked ways too, from the perception to the reality - or facets of their reality. And that includes Grace. At times I found her quite whinny, but then I had to keep reminding myself that she is a teenager who witnessed something horrible and she is a sandwich short of a picnic.

I read this book over a two day period. Every chance I got this book was in my hands. The ending chapters revealed a huge twist too, that was pretty cool. I didn't really see it coming either. So that was pretty cool. The price is $21 is book for a novel sized book, and this is hardcover too. I definitely would say I lost track of time with this one and I will be looking for others in the series to come out. I want to see where they go with it next. Whether we move away from Grace and get the background on one of the other characters or if the group get some other mystery to solve.

After being enrolled in the Song Festival, Geronimo Stilton's song, "Welcome to New Mouse City," goes to the top of the charts and makes Geronimo a star, but very few CDs are sold after the festival. Will Geronimo and his detective friend, Hercule Poirat, be able to solve the mystery?