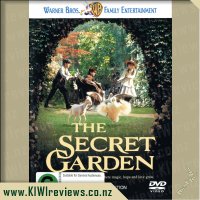 It's a special garden where friendships blossom, illnesses fade away and sorrows flee. There troubled orphan Mary, her spoiled, sickly cousin Colin and kindly county boy Dickon discover that a world of caring can make a world of difference. "If you look the right way," Mary says, "you can see the whole world is a garden."

It's been a while since I've watched "The Secret Garden" but it was a movie that I used to love, it aired on TV Four recently and I decided to record it. The kids wanted to watch a movie with me today and I decided to put this movie on, as none of my kids had seen it yet, though I fully expected that the longest any of them would last would be half an hour, boy was I wrong, they watched the ENTIRE movie. Right from the start the kids were hooked, wanting to know why there was an earthquake, why Mary's parents died etc. and a torrent of questions from them is a sign that they aren't just enjoying a movie, they're loving it.

This is a timeless story about family learning not just how to love but how to live again, from Colin, to Mary t Colins father, it all comes together beautifully. The garden is gorgeous and I can't help but wish that I had a garden of my own like that. The acting is wonderfully done, the three children did an amazing job in their roles and you really do end up hoping that Mary gets a loving family and that Colin finally gets his father back. My kids found some of the movie to be really sad but they both enjoyed the movie and would watch it again, so I'm thinking this will be one to own on DVD.

Man of Tai Chi is a 2013 Chinese-American martial arts action film on DVD, directed by and starring Keanu Reeves - a multilingual movie partly inspired by the life of Reeves' friend, stuntman Tiger Chen.

Tiger Chen is a Tai Chi student who is rather rebellious and uses Tai Chi to fight despite his master's concerns. When the temple where he studies get threatened from modern redevelopment, he fights in an underground fight club to get the money the temple needs. However he soon realizes that his employer has other, more sinister, motives.