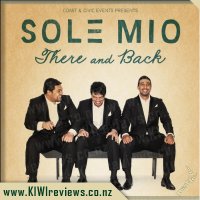 There and Back... Sol3 Mio Live in Concert Tour product reviews

Made up of two tenor brothers, Pene and Amitai Pati from Mangere, and their North Shore baritone cousin Moses Mackay, SOL3 MIO is the combination of three powerful and moving operatic voices, with more than a dash of uncontainable Samoan humour. By their own definition they are first and foremost 'classical singers bridging the gap with contemporary' , but the unique way in which they do it has already shown the potential to cut through the critical cognoscenti, and appeal to audiences who wouldn't normally be found anywhere near an aria. Their onstage brotherly bonhomie, off the cuff banter and impeccable comedic timing is no act, simply an extension of their natural selves, and the culmination of a lifetime's worth of singing, performing and entertaining.

A New Challenge for Banshee PA's Crew of misfits as season 4 opens to heightened problems needing to be fixed on both sides of the Law.

New this season, Eliza Dushku (Dollhouse) hits the scene and the hunt for Jobe ensues from S3 cliffhanger finale.

Hood, Carrie, Proctor, and the gang all return for a climactic, all or nothing run taking the 'fun' in dysfunction... To the extreme.