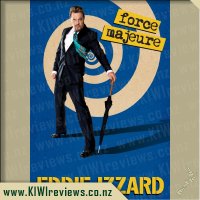 Disclosure StatementFULL DISCLOSURE: A number of units of this product have, at some time, been supplied to KIWIreviews by the company for the purposes of unbiased, independent reviews. No fee was accepted by KIWIreviews or the reviewers themselves - these are genuine, unpaid consumer reviews.
Available:
See website for details

Hailed as one of the foremost stand up comedians of his generation. Star of stage and screen. Tireless supporter of charity. Runner. Political campaigner. Fashion Icon. Eddie Izzard is all of these things and more. He breaks all the rules in comedy. Eddie Izzard will bring his massive FORCE MAJEURE world tour to New Zealand in February 2015.

Force Majeure is the most extensive comedy tour ever. Launched in March 2013, once completed this tour will have taken Eddie to more than 25 countries on 5 continents. From Cardiff to Kathmandu and Moscow to Mumbai, Force Majeure has travelled across Europe, Africa, Russia, the UK, Canada, America, India, Nepal, Far East and now Australia. Eddie recently completed two, three-month residencies in Paris, performing entirely in French and in Berlin performing entirely in German.

With the power and presence of Billy Connolly, the surrealism of Monty Python, the vocal talents of Michael Winslow, and an intellectual wit and subtlety all his own... Eddie Izzard is not a stand-up comedian. He's a comedic force of nature. Open about his issues, Eddie incorporates them into his sometimes-bewildering routine, and he also seems to have a thing for taking advice from chickens.

As the lights fired up and bathed the audience's eyeballs with blue and white incandescence, Eddie appeared as a silhouette on the stage, immediately bringing the audience alive to cheer him into the spotlight. Eddie dived right in, giving us a strange and hilarious mockumentary about how our city got it's name. Such "local" touches right at the start served to form an immediate and striking bond between Eddie and the audience. From that point on, he had us hooked.

We followed him through a meandering, but always entertaining, romp through lands strange and familiar, times long past and present... and all kept in check somehow with Eddie bringing himself back from the brink of the 'here be lost dragons' lands of the comedic landscape. I could see more than a few members of the audience were in tears, having trouble getting their breath back, from some of his jokes - particularly the bit about Welsh vs Indian accents. Having gone to uni with an Indian chap who spent his formative years in Bombay, and most of his adult life living in Llandudno - about as far north as you can be in the Welsh mainland without getting your feet wet - I was in hysterics, because Eddie is right! Gupta used to slide around between the two accents like a penguin on ice skates.

The show lasts about 2.5 hours from start to finish, with an intermission after the first hour, give or take. Be prepared for hilarity, surrealism, obscure punchlines that hit you just as you're trying to get to sleep later that night, and jokes that will stay with you like a hedge with a badger in it.

Eddie is, by far, one of the most accessible comedians of our generation. Very open, willing to answer almost any question, and truely one of Britain's most interesting renaissance men in high heels and stunning red lippy.

I am a geek when it comes to history and British comedy. I grew up on The Goodies, Monty Python, and lots of the Alternative comedians like the Young Ones and Ben Elton. I adore Julian Clary too. So I really like surreal, outrageous stand up. I have seen a lot of my heroes on stage over the years and I was so excited to get the chance to see Eddie Izzard live. I was even more excited when I saw our fantastic seats. So close to the front and centred nicely. We had an excellent view of the whole stage.

I first saw Eddie Izzard doing some stand up on TV one very late night. So I knew what I was in for, and I was pretty amped. The stage area was quite small, but it suited Izzard's performance. He doesn't traipse up and down the stage like others I have gone to see. The back drop was really cool, and I liked the way the colours of the spiral changed. The lights on the rigging around the stage were really effective and took command of the beginning and ending of the show. For this reason Izzard got very little heckling until the encore. It just had that feeling of being at a concert, and participation didn't feel necessary.

I admired Izzard's energy. Given the length of the show (even with the interval) and the high energy of his acting out scenes he was very impressive. A few times it felt like he was really lost in the moment on stage. One or two times he stopped a digression wondering if we were still with him. But that was great, because it got a laugh every time. I also just loved the way he moves through the history of England and Rome, royalty and religion, while still doing the surreal stuff. He tied everything together so well too, which I loved. I'm so glad that I got to finally see Izzard live on stage. I'd go again quite happily too.

Kylie Minogue joins David Tennant in this spectacular action-packed DVD release, the first for the new fourth series. It comes complete with a host of fantastic extras including the 'Doctor Who Children In Need Special' and 'Doctor Who Christmas Confidential'.

Moments after leaving Martha Jones behind on present-day Earth the TARDIS collides with the bow of the Titanic. The Doctor quickly discovers that it isn't the famous ship, but a ... more...