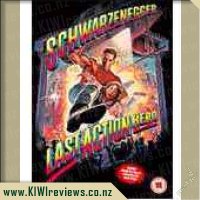 Danny Madigan knows all the first 3 Jack Slater movies in and out. The 4th one is just about to be released too, and with a magical ticket Danny really gets to know that movie in and out too, literaly speaking. During one of the action climaxes Danny is transported into the movie, into a world following other rules than the real one. Benedict, one of the evil guys, gets hold of the ticket and escapes out to the real world, a world where evil guys can actually win. Danny and Jack follow him back to the real world to get back the ticket and stop Benedict from killing the actor playing Jack.

I've grown up watching films by Arnold Schwarzenegger but I hadn't seen this movie, not quite to my dads liking but my mum ended up buying it in a DVD bundle and one wet, rainy day when I had nothing else to do and I didn't want to watch the same old thing, I popped this movie in and it is now one of my favorite Arnold Schwarzenegger movies. Danny idolises Jack Slater, a fictional character and cannot wait for the next movie and thanks to the man who runs the movie theatre he ends up IN the movie. Soon movie world physics come into play and there is so much room for fun here.

This movie makes fun of so many movie cliches and openly mocks them, there isn't any hiding of it, it is thrown in your face and you are expected to enjoy it. It also has one of the BEST moments and I'm sure Arnie must have enjoyed doing it as much I enjoyed hearing it when his character Jack states "I'll be back" to which Danny replies "but you always say that!", brilliant brilliant line. I love this movie, it may not be the best written or the greatest special effects but any movie that can mock its own genre and pull it off gets a big tick in my box.

When Kevin's family left for vacation, they forgot one minor detail: Kevin!

Eight-year-old Kevin McCallister (Macaulay Culkin) has become the man of the house, overnight! Accidentally left behind when his family rushes off on a Christmas vacation, Kevin gets busy decorating the house for the holidays. But he's not decking the halls with tinsel and holly.
Two bumbling burglars are trying to break in, and Kevin's rigged a bewildering battery of booby traps to welcome them!