« Harry and the Hendersons review 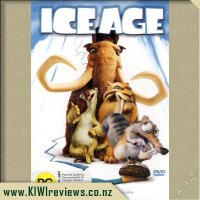 They Came. They Thawed. They Conquered.

Twenty thousand years ago, the Earth was being overrun by glaciers, and creatures everywhere were fleeing the onslaught of the new Ice Age. In this time of peril, we meet the weirdest herd of any Age: a fast talking but dim sloth named Sid; a moody woolly mammoth named Manny; a devilish saber-toothed tiger named Diego; and an acorn-crazy saber-toothed squirrel known as Scrat. This quartet of misfits unexpectedly, and reluctantly, comes together in a quest to return a human infant to his father. Braving boiling lava pits, treacherous ice caves, freezing temperatures and a secret, evil plot, these "sub-zeros" become the world's first heroes!

I was hooked on wanting to watch this when I saw the teaser trailer with Scrat, it was hillarious and it had me wanting more and so when it came out I had to watch it and so I did. Ice Age centers around Manny, a Mammoth who is miserable and hates everyone. He ends up unwittingly saving a human baby and then teaming up with a sloth who's brain is a slow ashis species naturally are and a saber tooth tiger who has a hidden agenda. This is a good story in that it gives an idea into what the Mammoths went through, as well as other creatures, then and now.

The voice acting is really good, I am not a fan of Ray Romano, I've seen "Everybody Loves Raymond" but I never really enjoyed it, only watched it because it was on due to my dad, but in this movie he does such a good job that I'm not busy thinking about ay other role he has done. The plot is good and shows how famlies can be made out of nothing and that eventually, with the right person, you can have friends again and find love. This is fun movie and whilst I haven't enjoyed any of the following films as much this is still one that I really enjoy and the kids love it too.

Score: 8.0
Product reviews for listing 123: Welcome to the Jungle (aka The Rundown) -  Directed by Peter Berg

A Los Angeles bounty hunter named Beck (The Rock) is instructed by his boss to travel to the Amazon jungle to retrieve his smart-mouthed, dimwitted, double-dealing son, Travis (Seann William Scott), who's been leading a life of adventure in Brazil.

But Travis is reluctant to leave, and when he tells Beck about a hidden golden idol, the ... more...