ProdID: 6174 - Harry and the Hendersons
Director: 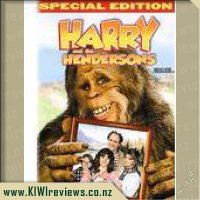 Harry and the Hendersons product reviews

An easy-going father's life is suddenly turned upside down when his car hits a real-life bigfoot. Thinking it's dead, they bring it home only to find that it is quite alive. Trying to hide their furry friend as they race to get him back to his natural environment isn't so easy.

This film originally came out in 1987, making it just a year older and so I grew up watching this and then watched some of the TV series that was inspired by Harry and the Hendersons. George is heading home when he hits something and sees that it is a legendary sasquatch, ties it to his hood and drives it home. Soon though he finds it is alive, wants to make money, changes his mind and ends up ultimatly loving the big foot who they have named Harry.

This isn't a fast paced film, there is a lot of searching for Harry and there is a hunter on the trail, this is the main bad guy of the film but it is good to see that this isn't a really nasty character, he is flawed and he is very very obsessed about it but naturally, like most bad guys in kids movies the situation is resolved eventually. This is a fun, light hearted movie that is a good easy family film for all ages, my three kids have seen it once or twice, since it was a must buy on DVD for me, and have rather enjoyed the entire film. I wish that there were movies more like this.

Score: 9.0
Product reviews for listing 566: Hawking
Topic: The story of the search for the beginning of time.

At the end of January 1963, 21-year old Stephen Hawking, a young Theoretical Physicist, listened carefully to the words of a senior neurologist as he explained that within 2 years, Stephen would be dead. He had been diagnosed with ALS - Amyotrophic Lateral Sclerosis, or motor neuron disease.

Hawking is a recored of the next 2 extraordinary years culminating in one of the greatest scientific breakthroughs of any age. ... more...