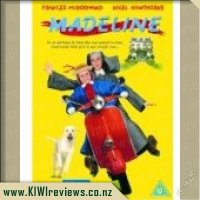 Madeline and her eleven friends live at school run by Miss Clavel (Frances McDormand) in an old house in Paris. The smallest of the girls, Madeline, is also the most adventurous! She loses her appendix but gains an awesome scare, falls into the River Seine only to be rescued by a dog called Genevieve, and matches wits with Pepito, the devilish son of a Spanish Ambassador who moves in next door.

However, when stuffy Lord Covington puts the future of the school in jeopardy, it's up to Madeline and her friends to save the day!

When this came out I had little interest in watching it, I had seen the books around here and there but the illustrations never grabbed me so I was never too concerned with the characters but I ended up buying this as there was a triple feature DVD set which had Annie and Fly Away Home in it, so this just came with the set. I ended up watching it, as why not? and I ended up having fun watching it and have watched it a few times since having fun with the lighthearted adventures along with Madeline and the other girls from the school.

This is a nice and fun movie with no adult jokes or anything too rough or mean going on and plenty of lessons to be had for every one involved. This movie is short, only an hour and a half but it packs a lot into it from the school looking at being sold, Madeline getting into trouble a couple of times and problems with the boy next door with none of it feeling like it was too much. My favorite part involves a dinner scene and the girls deciding they are vegetable-arians and later involving their teacher near the end.

A fun family movie, great for the children to watch.

Fans of action and fantasy alike will love this exciting new release of the film in which Arnold Schwarzenegger made his striking screen debut as the legendary warrior and hero, Conan the Barbarian.

Orphaned by a cold-blooded cult leader and his band of brutal marauders, Conan endures a childhood of merciless slavery only to become a gladiator for the amusement of his captors. Sent to the Far East to hone his fighting skills, Conan ... more...