I Am Soldier review

ProdID: 6162 - X-Men: Days of Future Past
Directed by Bryan Singer 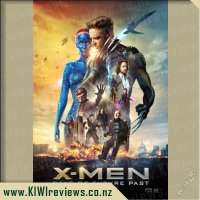 For me, the X-Men franchise hinges om Hugh Jackman's performance. The actor takes his role as Wolverine seriously, and is in the gym coming up to filming to ensure that he completely looks the part. That is something that I respect in an actor. The previous film only had one fleeting glimpse of him, but that one line was epic.

In this film, it follows Wolverine around as he treads through the past trying to prevent the end of all mutants and humanity. Not that the plot really has anything to do with him, and he has practically no role beyond being the vessel for the "time travel" to occur. That is really the disappointing thing. It has a kick-ass character that you have to watch all throughout the movie, who doesn't actually do anything. The movie does have an upside, that it introduces us to Quicksilver, and his scenes are done really well, but even his role is limited, which is a disappointment. Hopefully he will show up more in the future.

The continuity in this film is lacking in a few areas, and there are plenty of questions that are left unanswered. The only thing that this film really did was create a method of rendering parts of the original timeline moot, and being able to bring back characters that have long since disappeared. The special effects were great, but really was let down by the plot.

I'm not even going to look at how he has suddenly started to age quicker (considering he was born around 1880, but has suddenly since the third X-Men film become a silver fox), but this film was missing some vital Wolverine kicking ass with adamantium claws, and I hope that there will be some in the final film in the prequel trilogy.

All the music, fun and adventure under the sea resurface in this magical edition of Disney's 28th animated Classic. Groundbreaking animation, colourful characters and an Oscar winning song and score make THE LITTLE MERMAID even more ... more...