« Transformers 3: Dark Of The Moon review

X-Men: Days of Future Past review 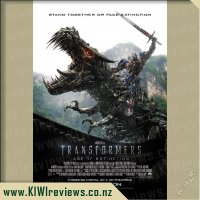 After an epic battle, a great city lies in ruins, but the Earth itself is saved. As humanity begins to pick up the pieces, a shadowy group emerges to try to take control of history. Meanwhile, an ancient and powerful new menace sets its sights on Earth.

A new group of humans, led by Cade Yeager (Mark Wahlberg), helps Optimus Prime (Peter Cullen) and the Autobots rise up to meet their most fearsome challenge yet: a worldwide war of good versus evil.

Transformers one was awesome. It was new and refreshing and totally unexpected. Transformers two brought back the original cast and was watchable. Transformers three well all I can remember is Megan Fox was not in it and to be honest not a hell of a lot more. Now Transformers four I had heard it was pretty rubbish but still wanted to see as had a new cast and well Mark Whalberg is in it.

I am so glad I did not pay any money to watch this is all I can say. Yes I have to admit it really is pretty rubbish and does not have a lot going for it. Even Mark Whalberg was terrible in it and everytime he referred to 'Bee' (Bumblebee) I shuddered it was so try hard and totally did not feel natural.

To be honest my tablet peeped half way thru so I jumped on facebook for a while because I could not bear to watch anymore of this movie. Don't get me wrong it definitely had that Michael Bay fell to it and the action scenes, although at times, a little too much where still enjoyable to watch. But the story was a little flippy floppy and I had never known a Transformer before to run out of ammo.

I did like some of the new cast and Joshua had me laughing away at how silly he was. For someone so rich and intellegent he really had no clue as to what was going on, but the way he hit on every girl had me in hysterics. Also Mark aka Cade and his daughters boyfriend was a great relationship. The whole time though when the bounty hunters where chasing the Autobots I kept saying where are the Decepticons until I clicked as to what exactly was going on. Really is silly. Why would the humans turn against the one ally that is helping us.

I did love the opening scene and it was so vivid and fresh unfortunately the rest of the movie turned very stale after Cedes partner in crime died. The movie actually took a tragic down turn. It tried to hard to be something that it really was not. Maybe if it had finished up then and there the movie would of been a hit.

This latest Transformer film has certainly been widely dismissed by critics and reviewers worldwide, and unfortunately I have to agree with them. With a title such as 'Age of Extinction' and all trailers and promotional artwork showing Optimus Prime battling and riding a transformer in the shape of a dinosaur (presumably the dinobot "Grimlock"), one would expect the plot to be based around these dinobots. Unfortunately, it's around 130 or so minutes into the film before we get to enjoy their limited appearance to the film that has nothing to do with them.

My main frustration with this film is the lack of continuity. You have weapons that run out of ammo, and you have others that seem to blast away indefinitely. Sometimes Transformers can fly, sometimes they can't. And despite the humans being useless at travelling and getting anywhere, it is the humans that are always tasked with transporting the "ancient relic" (If Optimus Prime can get to outer space in minutes, then it should be his job to get rid of any pesky bomb-like devices).

So the believability of this film is severely lacking. I don't even see the point of Mark Wahlberg and his family of co-stars (Don't even get me started on spending time teaching the world about Texas' "Romeo & Juliet" Loophole in Statutory Laws). The whole premise of the film destroys all previous "Transformers logic" from the previous films. The attention span rates poorly also, and I caught myself checking facebook instead of watching the film, which meant I had to go back and rewatch parts just incase I missed any important plot points (Nope).

The graphics were about as convincing as the previous films, so in most cases it was very obvious. On the upside, I found that the robots were largely easy to differentiate, which was made easier by the bad guys only having a couple of forms to choose from, and there on;y being a few autobots left on Earth. The special effects were very Michael Bay-ish and product placement made it seem like the film was funded entirely by companies, and not by any movie-making entity at all.

It had a few good moments, but almost reaching 3 hours in length, this film needed more moments, and less unnecessary deviations from the storyline and slow motion moments. Here's hoping that the fifth film learns from the failures of the previous sequels as Michael Bay passes on the producer's hat to another.

John Whittaker, a young English man, falls in love with and marries a sexy and glamorous American woman, Larita. However, when the couple arrive at the family home, his mother Veronica has an instant allergic reaction to her new daughter-inlaw.
Larita tries her best to fit in, but fails to tiptoe through the minefield laid by her mother-in-law. Larita quickly realises Veronica's game and sees that she must fight back if she's ... more...