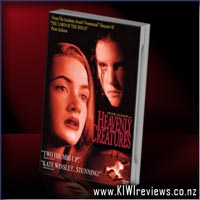 Based on a true story that shocked the nation

'Heavenly Creatures' paints a vivid and disturbing portrait of two teenage girls whose obsessive friendship leads to an unspeakable crime. This critically acclaimed hypnotic thriller chronicles the story of Juliet Hulme and Pauline Parker from the moment they meet in 1950's New Zealand.

Unhappy with their lives, the girls withdraw deep into a bizarre fantasy world of their joint creation. But when faced with a devastating separation, the now-notorious pair plots a horrifying and violent solution to stay together.

I wasn't a fan of Peter's work when this movie first came out, and to be honest, it really didn't strike me as the sort of movie I would enjoy... so I skipped over it. Many years later, after Peter finally impressed me with 'The Frighteners' and the 'Lord of the Rings' trilogy, I had the opportunity to revisit this piece of NZ history... and found myself really impressed indeed!

The special effects and animated clay-people from The Fourth World were masterpieces of the animators art for their day, and could still rival non-CGI SpFX... in fact, they should, since this was some of WETA Workshops' fine handiwork. Even the little glitches and continuity errors didn't stand out too badly, such as the movie poster for 'Creature from the Black Lagoon' which could NOT have been on the wall for real, since the scene was set well before 'Creature' hit the cinemas in the US, let alone NZ.

The movie really captured me from the onset, the quiet wallflower 'plain Jane' type student ending up befriending the beautiful, arrogant, British-born bratt... the contrast was so extreme that you'd never have picked it really. As William Randolph once stated, "Truth is not only stranger than fiction, it is more interesting".

Their friendship became so close, that they were assumed to be engaging in lesbian activities, simply because they were once observed sleeping in each others arms, fully clothed. This looks to be one of the key triggers that prompted their separation. Hulme's mother's affair caused the parental split, but the girls' 'infatuation' with each other seemed to be a contributing factor of their plan to 'remove' Honora Parker and thus remove the obstruction to Pauline joining Juliet in South Africa.

Despite Peter's brilliant and insightful co-authoring of the screenplay, and Direction of the film, the real 'core' of goodness came from the totally realistic portrayal by Kate Winslet and Melanie Lynskey, both of whom made their screen debut in this film. Lynsky was cast as Pauline Parker two weeks before filming began. Co-writer Fran Walsh discovered her at the last minute whilst scouring local high schools for Parker lookalikes. This almost non-existant prelude would have given her very little time to learn her lines, which highlights her talent, since she pulled it off perfectly despite that.

Some tidbits for you... Juliet Hulme was revealed to be mystery writer 'Anne Perry' in 1994 during the making of the film but all attempts to find Parker failed. In 1997 she was traced to a rundown cottage on a farm near Strood, Kent, England, where she runs a children's riding school. Since assuming the name Hilary Nathan the spinster has become a devout Catholic and devoted her life to handicapped children.

Almost all locations used for filming were the genuine locations where the events occurred. The tea shop where Honora Parker ate her last meal was knocked down a few days after the shoot ended. According to director Peter Jackson, when they got to the location of the murder on the dirt path, it was eerily quiet; the birds stopped singing, and it didn't seem right. So they moved along a couple of hundred yards.

Overall, I found this movie a compelling and somewhat disturbing look at one of NZ's most shocking pieces of non-wartime history. The movie itself was stunningly well done, and showed off Jackson's talent early on in the piece. Though there are many devotees of his even earlier work, such as 'Braindead' and the ever irreverent 'Meet the Feebles', H.C. would have to be classed as his first true masterpiece, and showcased a style that would later result in other wonderous pieces of cinematic history. Roll on 'King Kong' and let's see if his magic stands the test of time.

A young Nigerian boy, 'farmed out' by his parents to a white British family in the hope of a better future, instead becomes the feared leader of a white skinhead gang.