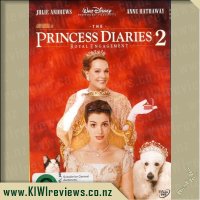 After getting over the revelation that she is a princess and part of the royal family of the small and obscure European nation of Genovia (with a population of just 50,000), American teenager Mia (Hathaway) moves to the actual country she represents, with her best friend, Lilly (Matarazzo) tagging along during summer vacation.

As she learns the job of being a country's future ruler, one challenge she's faced with is the prospect of being set up in an arranged marriage.

It's been about five years since Mia found out that she was a princess and set to rule the throne of the small country of Genovia (just 50,000 citizens but still no small task and Mia has been able to finish High School and College (after all, some of that would have been useful for running a country...) and she is now returning to her palace in Genovia. Things hit a bit of a speed bump though when she finds that, according to law, she must marry in order to rule and she's given just thirty days to do so! Enter the hyjinks as a Count who wants his nephew to rule and they set off to confuse Mia etc. so that she misses her deadline.

They did this film well, a tough subject of arranged marriage but made it a fun family film, the acceptance between both Mia and her chosen betrothed is both lighthearted and sad, they easily show how hard it is for the two of them as they resign themselves to this and try to get to know eachother as well as they can before their wedding. There are a few humorous moments, and yes, Mia still falls on her butt a few times and there is a great moment that has Julie Andrews singing! Given she had to hugely limit her singing, this is a fab scene in the movie. A great fun family film, that ages well from the first whilst still being true to Mia.

Emboldened by the return of Lord Voldemort, the Death Eaters are wreaking havoc in both the Muggle and wizarding worlds and Hogwarts is no longer the safe haven it once was. Harry suspects that new dangers may lie within the castle, but Dumbledore is more intent upon preparing him for the final battle that he knows is fast approaching. He needs Harry to help him uncover a vital key to unlocking Voldemort's defences, critical information ... more...