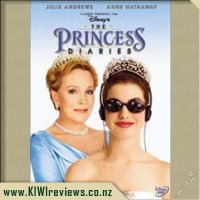 Unfortunately, her wish to be invisible is thwarted when her strict grandmother (Julie Andrews) arrives and delivers the shocking news that she's a real-life princess - heir to the throne of Genovia. Furious, the reluctant royal agrees to take "princess lessons" and make the biggest decision of her life - in three weeks. And so begins a comical transformation towards poise and princess-ness when she finds herself in the middle of a media storm, jealous schoolmates and a plot to take over her country...

I had read The Mediator set of books written by Meg Cabot and had enjoyed those, I never had an interest in her Princess Diaries books but saw the trailer for this movie (which is based upon the books, so even just reading the blurb there are a lot of changes). In this movie, Mia is a fifteen year old who has lived with just her mother, she finds out a couple of months after his death that her dad was a prince, and thus she is up to be the next queen, if they can calm down her nerves. I've watched this movie so many times and have still enjoyed it each time.

I've also watched the special features and I love the fact that a few moments of Mia being a clutz and falling over, slipping and injuring herself... Well that is actually Anne Hathaway falling down etc. and the director decided to just slip it into the film. Marshalls' daughter is in it as Charlotte, who's character is given the name Kutaway in the credits as anytime a scene didn't quite work out they would cut away to Charlotte... The special features are fun and I enjoyed them as much as the movie itself.

The movie was quite funny as she is a normal girl who gets nervous and just wants to be invisible but then she meets her grandmother who she has never seen before and gets life changing news. She is not a normal girl but a princess and her life changes in ways you can only imagine.

The actors do the parts really well, I had to laugh at the way things were going as she had to learn royal ways. Some of the story was rather predictable as she wasn't popular but as soon as people realize that they might be able to gain something from knowing her, she suddenly becomes popular as people start using her for publicity. I was watching I was thinking I hope she doesn't fall for the false friends and that she sees through them but unfortunately it was much too predictable.

The ending was good, it could have gone either way and she did give serious thought to saying no. I don't always give movies my full attention but this is one of the few that had my attention for the whole movie.

Looking forward to watching the second movie and see what happens next.

After leaving his LAPD narcotics post following a bungled operation that left him wracked with remorse and regret, Sheriff Ray Owens (Schwarzenegger) moved out of Los Angeles and settled into a life fighting what little crime takes place in sleepy border town Sommerton Junction.

But that peaceful existence is shattered when Gabriel Cortez (Noriega), the most notorious, wanted drug kingpin in the western hemisphere, makes a deadly yet spectacular escape from an FBI prisoner convoy.