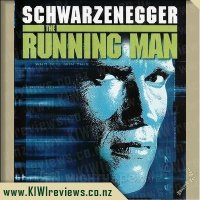 The year is 2019. The finest men in America don't run for President. They run for their lives. Television is now ruling people's lives. The most popular âśaudience participationâť game show is The Running Man â" where convicts can win pardons instead of âśparting giftsâť by defeating murderous henchmen known as âśstalkers.âť The stalkers haven't had much of a challenge lately â¦until Ben Rich- ards (Arnold Schwarzenegger) comes along.

"They love game shows, they love wrestling, they love sports and violence. So what do we do? We give 'em *what they want*! We're number one, Ben, that's all that counts, believe me." This one single quote really sums up the entire movie, it all comes down to their ratings and how popular they are. Ben is a soldier and when he disobeys an order he his imprisoned, but prison is not the best place to be in this world because if chosen, you get put into a reality TV show. Beat the professional hunters and you get freedom and money, but don't.... and you die.

The weaponry in this movie is nasty and you really wouldn't want to face it at all. I watched this a few times when I was younger (my mother was never happy with what my dad let me watch

) and again a year ago and I will certainly be buying this on DVD when I can as this is a really well done movie and considering all the reality TV shows that are on TV, have been on and will be on... This, whilst set in 2019 and not going to happen in the next four years, is pretty relevant and is a fun action film.

How far would an ordinary father go to spend more time with his children? Daniel Hillard (Robin Williams) is no ordinary father, so when he learns his ex-wife (Sally Field) needs a housekeeper, he applies for the job. With the perfect wig, a little makeup and a dress for all occasions, he becomes Mrs. Doubtfire, a devoted British housekeeper who is hired on the spot. Free to be the woman he never knew he could be, the disguised Daniel creates a ... more...