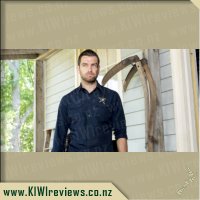 Banshee is an American drama television series created by Jonathan Tropper and David Schickler for Cinemax.

The series takes place in the fictional small town of Banshee, Pennsylvania. After serving 15 years in prison for stealing diamonds from Ukrainian gangster Rabbit (Ben Cross), the unnamed protagonist (Antony Starr) travels to Banshee to find his heist accomplice and former lover, Anastasia (Ivana Miličević). When he finds her, the protagonist learns that she is now a married mother of two living under the assumed identity of Carrie Hopewell.

Later, when the incoming Sheriff is killed, the protagonist takes on his identity as Lucas Hood, becoming the town's new Sheriff. Banshee sees Hood struggle with adapting to his new identity while dealing with the machinations of local crime lord Kai Proctor (Ulrich Thomsen), and remaining hidden from Rabbit.

After watching season one in three days I could not wait for season two. So much had happened in season one that it left you wanting more and to find out what would happen next. It had opened so many boxes and led down so many paths that you knew it would not always going to be pretty.

Although I enjoyed season two it didn't have the same power over me as season one. I did however enjoy watching more of Job and Sugars relationship. Also the police force had become tighter since the full out of episode one and there was the possibility that Lucas and Carrie would eventually become an item (really want to happen) but he went another way. Then there is Proctor and Rebecca, you know that was never going to be a thing of beauty but it has been entertaining watching Rebecca grow and turn her back on her upbringing and trying to find herself.

The characters always remain true to themselves and its fun watching them twist and turn as there world expands around them. I was glad that the truth about Lucas and Carrie finally got revealed to Gordon, the dude has some series issues and am interested to see where that goes. Still a thrilling show that leaves you wanting more.

If you are easily offended then this probably is not the show for you. It deals with sex, swearing, racism and criminal activity. It is gritty and exciting and you never know what is going to happen next, especially when dealing with deceiving people who only are looking at for themselves or what will benefit them the most.

Mike is an energetic, cheeky yet bountiful young knight-in-training. From mysteries that send him on quests around the kingdom, to tasks that need overcoming close to home, Mike approaches each new challenge with bravery and bubbling enthusiasm.