« Honey I Shrunk the Kids review 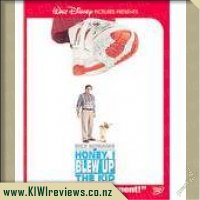 Honey I Blew Up the Kid product reviews

Having recorded "Honey I Shrunk the Kids" and watching it, we decided the very next night to watch "Honey I Blew up the Kid" as my friend had just bought it on DVD. This takes place a few years later and Szalinski is working in a laboratory and getting no good feedback or treatment from his boss. He sneaks in, with sons in tow and his toddler gets in the way of the beam which causes him to grow in size during the movie. The movie starts off with some animation and the kids were laughing their heads off, forget eating dinner, they wanted to see what the giant baby was going to do next.

This is a fun movie that follows on well from the first movie and the kids really enjoyed this, they actually wanted to finish the movie, so that was a good thing for the film. The special effects do well in this movie, as with any movie it's age, it does have its moments where you can easily tell that the special effects are in use but the rest of the film is so much fun that there isn't really any concern for it. I will be buying a copy of all three movies to add to my collection.

It has been a while since I have seen this movie and considering the lack of interest in the first movie I was wondering if the kids would be interested in this movie, as soon as they heard BLEW UP they were asking questions about the plot of the story and wanted to watch it as soon as I got it home from the shop.

I put the movie on expecting to be watching the movie on my own again but to my surprise the kids really liked the movie and couldn't stop telling me their favorite parts of the movie, the special effects were good considering that the movie is not new. My personal favorite part of the movie is when the mom hits the guy for trying to use a "gun" on her baby. I know that there is another sequel to this movie but I have not seen it yet.

The story is good. You can almost imagine a giant baby running around and the normal sized parents trying to get it sorted and the various ways they try.

I have this on DVD and would love to own the first one although this one was a lot more popular with the kids. Family movie night will be a lot more interesting with some of the older movies.

In a dystopian Detroit, grand houses that once housed the wealthy are now homes of the city's most-dangerous criminals. Surrounding the area is a giant wall to keep the rest of Detroit safe.

For undercover cop Damien Collier (Paul Walker), every day is a battle against corruption as he struggles to bring his father's killer, Tremaine (RZA), to justice.

Meanwhile, Damien and an ex-con named Lino (David Belle) work together to save the city from a plot to destroy it.