« The Karazan Quartet : 4 : Quest for the Sun review 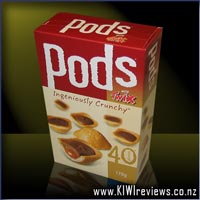 Ever found yourself licking an ice-cream stick? Or eating biscuit crumbs off your lap? You have, haven't you? And we know why. It's because you've finished something tasty. The key word being 'finished'. Kaput. The final siren on your enjoyment has been blown. And you can't handle it.

So that's why we created 'Pods' crunchy biscuit. They start off as biscuit wafer caups baked in our revolutionary Wakrone oven which makes them amazingly light and crunchy. In these wafer cups is a delicious Twix filling. And in each pack are 40 of these delicate suckers - and they're bite sized.

See the genius yet? That's right. You can have one and eat it. And it tastes great. And then when your brain calls out and says 'Hey you, give me more of whatever that was,' you can reach in the pack and have another. And another. And that, my learned friend, is why enjoyment now lasts longer.

Cleaning Your Microwave with Lemons
Rating: 10.0

This was my least favourite flavour of the range that I had tried. These pods had a much stronger caramel flavour, compared to the others. Unfortunately I found it far too sweet. The wafer-like biscuit base did little to reduce the intensity of the flavour, and after two or three, I tried scraping the filling out, and the wafer biscuit with a hint of caramel was nice, but not worth the effort, so I ended up giving the packet away to my friends. They ate them happily, but it was just far too sweet for my palate.

I have the same concerns with melting as I did in my Snickers Pods review, and there is very little else that I can say about this product. I have yet to try the Bounty bar flavour of this range, as I have yet to be able to find it in a store.

I was rather disappointed in this range, but I applaud 'Mars' for trying something new. A swing and a miss really. For those that do enjoy the flavour, I'd recommend saving them for parties or movie nights; any occasion where you are surrounded by friends and/or family that you can share with.

I seriously love Pods! Who ever invented them had such a great idea. They are so unique, and have now stood the test of time. Although these days are in bags rather than boxes as the photo suggest.

They have an awesome thick chocolate lid and the twix filling, which tastes the same as a twix bar (as you would expect - but hey sometimes- yah know!!) and a firm yet soft base.

These are great to have in the cupboard to give one to the kids as a treat, as you don't need a lot to feel like you've had a good treat ... or on the other hand they are easy to sit down and demolish completely is your self control lets you!

Caramellious - Yes, I invented a new word just for these!

The Twix Pods are very good...
With just the right amount of caramel in them to let you know it was there, the good crunchy biscuity base and topped with chocolate these would be perfect to eat while sitting and having coffee with a friend, just something sweet to nibble on.

However, I did find that this flavour wasn't the one that I could eat many of in one sitting. More for a wee snack than serious munch out food for me.

Having eaten four boxes of these things I can safely say that i know what they taste like. I can also say that I feel rather ill but that is beside the point. At first they struck me as rather gimicky without the long term appeal of more classical chocolate treats, that they should have been bigger and more buscuit like and with more filling. This view has been altered after extensive testing and thinking about where you would have cause to eat them. As far as a sit down and munch out on them snack with a movie they are not perfect, as after about half a dozen you don't want any more as they are quite sweet, even more so than normal chocolates thanks to the cereal like biscuit outer. However they make up for this thanks to the novelty value gained from trying to eat all the biscuit first or trying to separate the two peices (like pulling apart liqorice allsorts). I am of the opinion that they would be best suited towards a dinner party of some description, as they would fit in amongst the crackers and cheeses as well as the chips and pineapple pieces on sticks, small and interesting to tide you over till dinner. This I think is reenforced by the fact that they are packaged in a box rather than in a bag, even if this is just to protect the fragile pieces it elevates them to classy snack status, like those chocolate wafer sticks and magnum icecreams. Pods are a tasty treat, but not to be overdone, enjoy a few with a cup of (insert ridiculously named coffee beverage) and enjoy the moment safe in the knowledge that you are far trendier than anyone else in the vicinity. Or impress your friends and collegues with pre dinner nibbles and knock off the Jones' for First Place on the neighbourhood coolest dinner party list. For you ease and convenience I have ranked each flavour in terms of my preference. I'm not saying that this is The Be All and End All to these Flavours, it's just my opinion. Pods are labelled as "Ingeniously Crunchy" and while they are definately crunchy the ingenious part remains to be seen, they may not be my cup of tea, but then I don't drink tea either.

The caramel biscuit sticks that should have been the easy favourite of the flavours certainly started out in First place. Unfortunately they were eventually edged down to third place due not to any problem on their part but due in fact to the quality of the other flavours. The sweetness factor was a big part of their placing, twix pods are very sweet so you will be hard pressed to eat more than a handfull, any more and you'll fell like your eating chocolate caramel flavoured nutrigrain.

Wasn't able to eat a heck of a lot, as everyone around me had become as addicted to these as I had. Could clearly taste the Twix, and the base and chocolate certainly added to it. Great movie food.