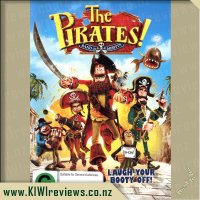 Set sail for a fun-filled voyage and hilarious pirate antics with the biggest Band of Misfits on the seven seas! When the infamous Pirate Captain (Hugh Grant) is shunned once again by his rivals Black Bellamy and Cutlass Liz, he sets his sights to win the coveted Pirate of the Year Award! With his trusted dodo, Polly and rag-tag crew at his side, the Pirate Captain will need to battle a diabolical queen, save a young scientist and never lose sight of what a pirate loves best: Adventure!

Stop motion movies have to be the number one favorite type of movies that I enjoy and so when the kids asked to watch this I was more than happy to say "sure thing." This is about a ship full of pirates whos captain longs to win the prize of number one pirate, but he just isn't rotten enough, they end up catching the eye of a scientist who notices that they have a pet Dodo! They then have to fight off the advances of the Queen who requests Polly (the Dodo) as a pet but has other nefarious plans for the bird.

I love that it is a real mash up of characters and personalities within the crew of the pirate ship and this adds a lot of fun to the movie. The fact that the typical parrot on your shoulder has been replaced as a dodo is wonderful and I love how it is dealt with. This movie takes aspects of the time and gives it a new twist, I thought the Queens plans were rather different, not what I was expecting and also gave the kids something to think about.

This si a delightful movie with plenty of laughs for the whole family.

The future. Mankind is now genetically engineered to stop aging when they reach 25. After that, you get 1 year to live, unless you earn more. If your clock reaches zero, you die.

When Will Salas is falsely accused of murder, he must figure out a way to bring down a system where time is money - literally - enabling the wealthy to live forever while the poor, like Will, have to beg, borrow, and steal enough minutes to make it through ... more...