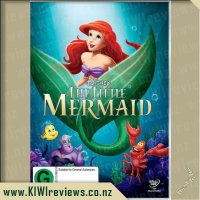 All the music, fun and adventure under the sea resurface in this magical edition of Disney's 28th animated Classic. Groundbreaking animation, colourful characters and an Oscar winning song and score make THE LITTLE MERMAID even more popular today than the day she first splashed on screen!

Ariel, the fun-loving and mischievous mermaid, lives in an underwater paradise with her father King Triton, and is enchanted with life about the sea â" even more so after saving a handsome prince from drowning! Against the advice of her best friend Flounder and the hilarious reggae-singing crab Sebastian, Ariel strikes a deal with the sea witch Ursula. In exchange for her beautiful voice, Ariel will become part of the human world. But what seems a dream come true becomes a heated race against time in which Ariel must win the prince's love and save her father's kingdom.

"Darling it's better, down where it's wetter, take it from me, what do they got, a lot of sand, we got a hot crustacean band!" This movie is nearly as old as I am and it is one that I have watched at least once every year or two, and it is such a favorite that when it came out on DVD I had to grab it and my three children have been enjoying this movie as well. Based upon the famous tale, but taking out aspects like the 'walking on broken glass' sensation, Ariel longs for a life on land and you can't help but hope that her dreams come true.

The animation is wonderful, standing the test of time and still looking just as good, the digital remastering helping a bit there. The songs stick in your head and I pop out with them every now and again, when suited or just for fun. The special features includes some clips that ended up on the cutting room floor, so they didn't even get animated, which is rather interesting to watch. Then you can also take a trip on what was their idea for a Disney ride that was never finalized and built. "Someday I'll be part of their world."

Haunted by a tragic past, Marine Tommy Conlon (Hardy) returns home for the first time in fourteen years to enlist the help of his father (Nick Nolte) to train for Sparta, the biggest winner-takes-all event in mixed martial arts history.

A former wrestling prodigy, Tommy blazes a path toward the championship while his brother, Brendan (Edgerton), an ex-fighter-turned teacher, returns to the ring in a desperate bid to save his family ... more...