Home > Categories > Movies > Fantasy > The Hobbit: 3: The Battle of the Five Armies review

ProdID: 6097 - The Hobbit: 3: The Battle of the Five Armies
Directed by Peter Jackson 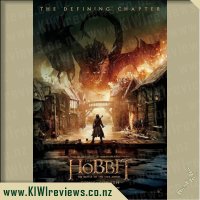 The Hobbit: 3: The Battle of the Five Armies product reviews

Having reclaimed Erebor and vast treasure from the dragon Smaug, Thorin Oakenshield (Richard Armitage) sacrifices friendship and honor in seeking the Arkenstone, despite Smaug's fiery wrath and desperate attempts by the Hobbit Bilbo (Martin Freeman) to make him see reason. Meanwhile, Sauron sends legions of Orcs in a sneak attack upon the Lonely Mountain. As the fate of Middle Earth hangs in the balance, the races of Men, Elves and Dwarves must decide whether to unite and prevail -- or all die. One thing that I wish these long, split up, single story, movie stories could do on DVD, is have one of those introductions like the television shows do; "Previously on The Hobbit". This movie jumps straight into the action, with Smaug doing as he promised, but this whole action sequence barely lasts through the first 10 minutes of the film.

The next 50 minutes are much less exciting, and the final 82 or so minutes are more exciting but lacking. 'The Battle of Five Armies' would lead you to believe this film would have five armies. By my count, we Thranduil's Elvish Army, a group of Laketown refugees, Dain's Dwarf Army, Radagast the Brown and his Animals, Azog's Orc Army, Bolg's Second group of Orcs, Goblin Mercenaries, and finally Thorin and 12 other Dwarfs. Three main armies, and apparently two of the other groups count as armies too (Bolg's second army looked large and formidable, but were largely absent from the visible fight).

And absent from the fight is the main issue that I have with the film. While it has many groups that are at war with one another, they are all nameless and I have nothing invested in either side. Apart from Bard (Luke Evans) and Tauriel (Evangeline Lilly), the other main characters are notably absent from the fracas, and thus little time is actually spent watching the armies battle. In fact we don't get to see the battle end. It just happens in the back ground.

As would be expected, the effects are good, and the action scenes (when they happen) are exciting and well choreographed, but the film spent far too much time setting up the Lord of the Rings, and not enough time on the exciting battles. Smaug's appearance was far too brief, and realistically his plot line should have been ended during the second film, rather than introducing him again; while it would encourage more people to watch the film to see the ending, it is very disruptive to the viewing experience. I was let down by it.

Perhaps it would be better if the trilogy was watched in one giant marathon. But as a stand-alone film, the focus seemed to be in the wrong places.

The final installment in the Hobbit trilogy and we start off right where we left off, with Smaug heading to Lake Town to rain down fire on them. You fly straight into it, no pause, no break for breath, action right away as the dwarves and Bards children try to flee the fire an destruction. The one thing that I wasn't sure about and was glad followed the book was that Smaug was only there for a short time and was defeated as per the book. Soon the survivors of Lake Town head to the ruins by the Misty Mountain and try to start again but war is not far off.

Things slow down again for a bit, some action thrown in now and then but there was a lot of concentration on Thorin and his descent into madness, how he changes and how this effects his friendships. I felt that this was done really well and was busy sitting there wishing the others would just get on with it but their dedication to their friend was strong. The special effects were really well done, the fighting going on and then of course all pure size of the armies and the various creatures... There were a couple of times during such scenes where it could be spotted that it was nor real and Thorin's cousin did not look real to me for most of his part.

The acting in this was done wonderfully well, as with all the other movies. I do wish that Bards daughters had been given a chance to defend themselves rather than just running and screaming and being saved by their younger / older brother. Though not in the book, there are a few parts in here to link these three to Lord of the Rings and that does make sense for those that haven't read the books and also shows how they got to where they are in the LOTR trilogy.

This was a fun two and a half hours, though my mind did drift away from it for a short time during the battle at the end, and I really did enjoy it. I look forward to it coming out on DVD so I can buy it and enjoy a Middle Earth marathon.