ProdID: 6089 - Once Were Warriors
Directed by Lee Tamahori 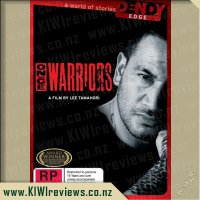 Once Were Warriors product reviews

Eighteen years after Jake (Temuera Morrison) and Beth (Rena Owen) married, it's easy to see why she found him so irresistible. Jake is muscular and handsome, he exudes an explosive sexual energy, even now, after 5 children, he can still arouse her with one look, but Jake too often proves his masculinity with his fists. He regularly explodes into violence that threatens to destroy Beth and their family - til it's almost too late.

The first time I saw this movie I was still living in South Africa and my then boyfriend wanted to see the movie so I thought it would be a good movie to see, I hadn't seen any of the trailers for it so when we came out the cinema I was wondering if he had lost his mind, the movie is full of violence and graphic scenes that I never thought I would see in a movie. All I knew going into the movie was that it was a true story taking place in some small country called New Zealand so had no real experience of life in New Zealand to know what to expect.

Since then I have moved to New Zealand and have watched this movie again but this time I have the knowledge of living here for a few years and having spoken to some people and them saying that watching Rewa was like being at home with their mum so the movie was realistic. I think that all the actors did a great job, it can't have been easy to do some of the scenes and there are a lot of the lines that are now rather famous.

I have seen the movie a few more times since then, I know what is going to happen and still feel like it is so real. I would recommend that this movie be watched by mature audiences as there is a lot that kids shouldn't be exposed to.

I remember seeing a small amount of this when it was on TV, during one of my late night 'I want to stay up as long as I can' days (though I was lucky to make it to 11pm

) and at the time I only saw a very small bit of the movie, it wasn't until some years later that I finally sat down and watched the entire movie. This is a very gritty, raw and unflinching look at gangs, domestic violence and abuse, suicide and rape and the effects that it can all have upon even just a few people.

The acting on this is brilliantly done, fully believable and all adds towards making this one powerful film that I feel, even though I would only wish to watch it once, should be watched just for the sake of being able to say that you have watched what is perhaps one of the best movies to come out of New Zealand. Watching this can give you some insight into the life of such a family where domestic abuse is prevalent, yes, it can't give you a 100% view of things but if you don't see something then you haven't a clue.