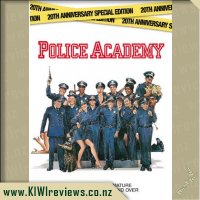 When the mayor decides that the doors of the police academy be open to any and all, the applicants swarm forth like hordes of losers in a colorful assortment of non regulation sizes, shapes and eccentricities.

I have watched this a few times growing up and enjoyed it every single time, bought it on DVD a couple of years ago and have only watched it a couple of times, so it due time for a re watch.

A new mayor is elected and she changes the rules so that anyone, no matter their gender, athleticism, IQ, race etc. can join the police force. This annoys those running the police academy who aim to make the new recruits so upset that they leave, yet they run into trouble when one recruit isn't allowed to quit but because he can't ask to leave and they can't just boot him out, he causes as much trouble as he possibly can.

The range of characters is wonderful and a few of them give a few surprises throughout the film. Though I cannot remember his name, I loved the man who could do all of the various sound effects throughout the movie, so clever (and I loved him in Spaceballs, with the beeps and the sweeps), quite talented. I always have a good laugh when watching this, no matter how many times, so it stands the test of time well and just goes to show that some jokes will always be funny.

I had to have a good laugh at some of the statements said by some of the characters that were sexist and racist. Welcome to the police academy where the staff don't seem to be able to do anything right and the recruits are a bunch of misfits and oddballs but by the end of the movie there are some firm favourites and some that you just have to put up with.

I really like some of the characters and have watched all 7 movies a few times, I have my favourites and some that although I seriously don't like them I have come to realise that without them the movies wouldn't be as funny. I like that although a lot of things are suggested you don't get too see a whole lot of "naughty stuff" but one thing that was a bit disappointing when watching as an adult (I didn't even think to look out for this as a teen) was that there was a bit of female nudity but none of the male actors had to bare all for the camera and yes I know it wasn't the done thing but disappointing that to sell movies the producers thought it was fine to strip the female characters.

I thought I had the whole set (I used to have) but found that I have seriously misplaced most in some of my moves so have just bought the whole box set and will enjoy a Police Academy marathon at a later date.

In 1993, Deborah Lipstadt publishes a book called "Denying the Holocaust", in which she refers to Irving as a denier. Soon after, he sues her for defamation under English law, where the burden of proof is on the ... more...