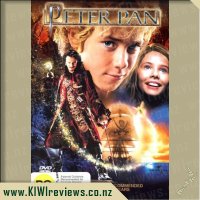 In stifling Edwardian London, Wendy Darling mesmerizes her brothers every night with bedtime tales of swordplay, swashbuckling, and the fearsome Captain Hook. But the children become the heroes of an even greater story, when Peter Pan flies into their nursery one night and leads them over moonlit rooftops through a galaxy of stars and to the lush jungles of Neverland. Wendy and her brothers join Peter and the Lost Boys in an exhilarating life--free of grown-up rules--while also facing the inevitable showdown with Hook and his bloodthirsty pirates.

I know the story of Peter Pan and Hook and this was my movie of choice tonight as I haven't watched this version of the story before.

I loved the story line and the acting, the special effects were great and the actors did a good job. I really liked how some of the scenes were done and my boy were rather glad to see the "tic tock croc" was included in the movie and there were a lot of laughs. The sword play was well done, glad to see that Wendy was included as a pirate for a while.

I made the mistake of getting comfortable on some bean bags as I had a sore back and I must have been a bit too comfortable as I drifted off to sleep but that didn't last long due to the kids laughing due to some more antics of Peter Pan and Hook.

I'm glad that movies like this are made as they encourage kids to imagine and dream as I find that kids grow up far too quickly these days. The kids made comments that they like Peter Pan but they are not too fond of Hook.

I will be buying this on DVD for us to watch again as it is good to have more than one version of a great movie.

I grew up with the animated Disney Peter Pan and loved watching Hook (Robbin Williams, then later Finding Neverland and Neverland, and of course this version of the well known Peter Pan.

In this version we have Peter loosing his shadow and thus we have Wendy sew his shadow back on and is then invited to go to Neverland, bringing along her brothers John and Michael. We meet Tiger Lilly, Tinkerbell, the mermaids and of course Hook and his band of pirates. We have a few deaths along the way but other than seeing the hole from the gunshot wound there isn't anything more graphic, so a big plus for viewing with the kids.

There was tonnes of laughs from the children, and a few chuckles from us adults. The ending where Wendy, John and Michael return home really gets the throat clenching starting and the reactions from both parents is heartwarming, and then throw in the Lost Boys... It is a gorgeous ending to a fun and adventurous story. I love that Wendy got to fight just as much as the others, not too much damsel in distress there and it fitted in perfectly. The special effects are done really well, when they fly through space it is stunning!

A fun addition to the Peter Pan folklore and one for the whole family.