All Dogs go to Heaven 2 review 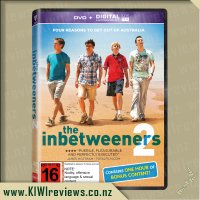 The film picks up several months after the first movie finishes, with Jay proving the catalyst for the boys' new adventure, having split up with his girlfriend and headed off to Australia to stay with his uncle.

If you are unfamiliar with the Inbetweeners series or last movie and want to a nice family friendly movie to watch with your kids or elderly relatives, then put this movie down gently and rapidly walk away.

However, if you prefer some guilty pleasure I guess you could pick it up and hide it away for that time when you want a rollicking good belly-aching laugh-fest when you are either on your own or with a bunch of like-minded mates.

This is not one of those saccharine-laden, cliche-ridden, historically inaccurate American movies; but hilarious, totally non-PC English comedy at its finest - revolving around Sex, Girls, getting drunk and toilet humour. The sort of comedy that does not need the canned laughter track to tell you when to laugh because the writer thinks this is funny. This is comedy that stands on its own feet (if it wasn't drunk and flat on its back!) because it will make you laugh from genuine mirth or perhaps unstifled embarrassment.

Yes, it is puerile, sexist, disgusting (in places) and probably everything you should not want to watch in a movie but this really is how young men think; and there is some schadenfreude in watching and enjoying this movie.

I am sure the male readership of this review will be able to identify some of the characters amongst their old school friends (or even identify themselves amongst the characters on display (I guess I was, and still am, the "Will" of the pack. The geeky, nerdy Will). I can identify some of the other characters and situations from the crop of boys at an English Boarding school life. And, yes, sex is usually pretty much all they think about; and at an all-boys English Boarding school - the myths about girls is pretty much summed up by the whole genre of the series and movies. And this is probably why I enjoyed the movie so much.

So, rather than set in the England or one of the Balearic Island where young English love to inhabit an inbetweeneresque world (See Inbetweeners Movie), the boys take a trip to Australia based solely on the baseless delusional boasts of one of the boys who is already there, and the remaining clueless trio decide to join him. After uncovering the truth behind his boast they set off on a road trip with more ensuring hilarity. The fact it is set Australia is really just incidental to the movie - it could have been anywhere else in the world with no loss of plot.

I would like to say there is some deeper message or meaning behind this movie - there isn't. It's all up front and in your face and should be enjoyed for what it is.

In the sleepy small town of Centerville, something is not quite right. The moon hangs large and low in the sky, the hours of daylight are becoming unpredictable, and animals are beginning to exhibit unusual behaviours. News reports are scary, and scientists are concerned, but no one foresees the strangest and most dangerous repercussion that will soon start plaguing Centerville: the dead rise from their graves and feast on the living, and the citizens must battle to survive.