« That is NOT a Good Idea review 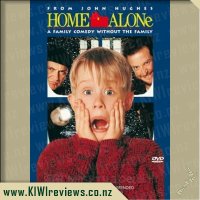 When Kevin's family left for vacation, they forgot one minor detail: Kevin!

Eight-year-old Kevin McCallister (Macaulay Culkin) has become the man of the house, overnight! Accidentally left behind when his family rushes off on a Christmas vacation, Kevin gets busy decorating the house for the holidays. But he's not decking the halls with tinsel and holly.
Two bumbling burglars are trying to break in, and Kevin's rigged a bewildering battery of booby traps to welcome them!

I have many happy memories of watching this movie as a child, especially when it was on television around Christmas time. I was looking for this last Christmas on DVD, but unfortunately I have not been able to find it anywhere! My mother in law got me a different version with another child acting the part of the left behind child, but it just wasn't enjoyable.
It is a feelgood, fun, family movie, with something to make everyone laugh, even the adults. There is humour, wit and silly antics and it never gets boring, no matter how many times you watch it. I am sure every child has thought about how they would booby trap their own house if the need arose! Macaulay Culkin plays his part in this movie so well, capturing hearts around the world (what a shame he has turned out to be a bit of a dirt bag in his later life!)
Some very small children may find a few bits a little bit scary, but it is definitely suitable for children, after all it was made for them! I would buy this movie on DVD in a heartbeat - if I could find it anywhere! When I have children, I will play them this movie every Christmas, it is a timeless classic!

Home Alone was a staple of my childhood, the number of times I watched it...? I hadn't watched it for a few years, but seeing another (awful looking) sequel, it brought back fond memories and so I went on a hunt for this film. Took a little while but I managed to find this one and the second movie.

Kevin is having some issues with his family and home life, but things are about to go a little out of hand when, after wishing his family would all disappear, he wakes up to discover they are gone. Due to a few issues, Kevin's family have flown away to Florida without him, but he doesn't realize that. Soon enough though, he finds himself defending himself from the "Wet Bandits", two robbers who want to rob his house. Much hilarity ensues as Kevin fights for his home and his mother tries to get home to him before Christmas.

Culkin does a great job in this movie as Kevin, a kid who thinks he has gotten his way, sets about making the most out of being home alone, fights off the baddies and then learns that no matter how messed up or annoying your family may be, there isn't anything quite like your family. He comes up with some ingenious ways to beat the bad guys and this had the kids laughing along, enjoying it, and asking for it again.

This is still a firm favorite and will be a part of our Christmas movie viewing tradition.

I remember the first time I watched this movie, I thought it would be fun and yes parts of it was fun but there were parts that had me sitting there thinking "I paid good money to see this?" and another part of my brain thinking that Americans are strange.

The basic story was easy to follow, what happens when you "forget" a problem child at home? What does the child do while home alone and what happens when some unfortunate burglars decide that they want to try their luck as no one is supposed to be home. What follows is supposed to be funny, I like that the burglars aren't successful in their mission but the defences that Kevin uses are a bit way too far fetched, I mean logically what child would think like that?

The actors are good, Macaulay Culkin looks like an innocent young child and you start off feeling sorry for him but by the end of the movie you can see why the family treat him like a problem child.

I'm glad I did watch this and have seen it once or twice since, mainly due to the kids asking what the movie was about but it is not one I have any interest in owning. There are a few sequels but that would be a separate review.

A young Nigerian boy, 'farmed out' by his parents to a white British family in the hope of a better future, instead becomes the feared leader of a white skinhead gang.