« Sister Act 2: Back in the Habit review 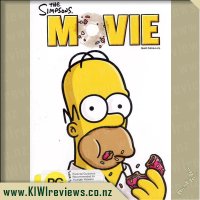 In the eagerly awaited animated feature film based on the hit TV series, Homer must save Springfield from a disastrous scenario brought about by his own thoughtless actions.

Having grown up with The Simpsons, as a constant at my dads house (seriously, he would record and watch the repeats when there was a marathon, watched it every night it was on etc.) so I'd enjoyed it enough that I wanted to watch this, though not crazy enough that it had to be at the movies.

Homer, as usual, manages to screw things up and Springfield ends up in a giant dome, the Simpson five manage to escape but in the end return to try and fix things, and naturally a lot of Simpson jokes and hilarity ensues. My favorite part is when Homer is on a wrecking ball being swung between a rock and a building called "Hard Place", loved that play on a well known saying. This is everything that you would expect from The Simpsons, but in saying that, this only felt like an extended episode, not a movie and it wasn't anything that couldn't have been resolved usual Simpsons style, within thirty minutes.

The plot is nothing amazing and nothing special when compared to the rest of the entire shows run so it isn't something that I feel the need to watch time and time again, especially now that I no longer enjoy the series as much as I used to. This has some good jokes and is a good part of pop culture but The Simpsons just ain't what they used to be, so this won't be a movie I watch too often.

The award-winning film-making team behind the hit documentary The Beatles: Eight Days a Week - The Touring Years turns to another musical phenomenon with PAVAROTTI, an in-depth, no holds barred look at the life, career and lasting legacy of the musical icon.

Dubbed "The People's Tenor," Pavarotti was the rare combination of personality, genius and celebrity and he used his prodigious gifts to spread the gospel of opera as ... more...