ProdID: 6069 - Sister Act 2: Back in the Habit
Directed by: Emile Ardolino 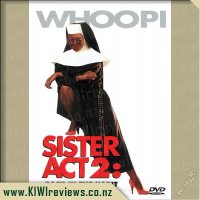 Sister Act 2: Back in the Habit product reviews

Back in the habit.

Deloris Van Cartier returns in this hilarious encore to the runaway smash hit, Sister Act. This time around, the twist 'n' shout Sisters of St. Catherine's are in over their heads trying to run an inner city school full of rowdy teenagers.

Their prayers are answered when Deloris agrees to go undercover as the school's new music teacher. Once again Sister Mary Clarence finds herself dodging dogma and roking religion as she tries to convert her "class from hell" into a hip-hop gospel choir from heaven.

I can recall seeing this when I was younger but the only thing that I could recall with great detail was the final dance number (not in the end credits, in the competition) as I rewound the tape and watched it over and over and over again, just that part (I think I killed the tape doing that), so when I bought the first Sister Act I knew I needed to grab this movie too and finally remember what happens in the rest of the movie. Deloris gets a call for help from her nun friends from the first movie, and so once again she dons the habit and clothing of a nun and helps in the school the nuns are now teaching at.

The plot in this is kind of sub par, you have the priest who is trying like mad to uncover Deloris' secret, Deloris trying to get through to the troubled young youth (aiming for one of the kids more than the rest, especially as her mum doesn't want her singing) and trying to save the school from being shut down. The movie itself doesn't really stick to keeping my attention but it does still have some fun parts and the final competition song always has me singing along and wanting to hit rewind on repeat.

Years after Earth has been ravaged by an alien invasion, Ender Wiggin (Asa Butterfield), a shy, strategically brilliant boy, has been chosen to defend Earth from an ever-present hostile threat. His prodigious skills immediately apparent, Ender is sent to Battle School, joining hundreds of precocious young adults in the pursuit of becoming the ultimate military commander. As Ender excels at Battle School, he attracts the attention of the highly ... more...