Sister Act 2: Back in the Habit review 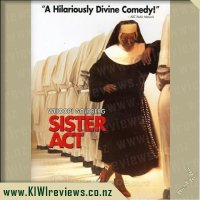 Relive all the fun, laughter and irresistible music of the unforgettable hit comedy Sister Act. A sassy lounge singer (Whoopi Goldberg) is forced to hide out from the mob in the last place they'd expect to find her - a quiet convent. There her unruly behavior attracts a flock of faithful followers - and before long, she turns the nuns' tone-deaf choir into a soulful chorus of swingin', singing sisters. But when the group earns rave reviews, her sudden fame jeopardizes her hidden identity. Overflowing with laughs and '60s Motown hits, Sister Act is a divine comedy that delivers habit-forming fun every time you watch it!

Whoopi Goldberg in my favorite role, Deloris Van Cartier, a show girl in Las Vegas who is sleeping with a married man, she finally works up the courage to tell him that it is over when she happens to witness him murder someone. On the run and under police protection, she ends up the one place no one would think to look, a convent. Deloris learns a lot about herself whilst also teaching the nuns a lot and ending up a much happier person.

Listen to classic pop songs given a religious twist, and done well, as Deloris takes these nuns from awful singers to one heck of a choir. There are a good amount of laughs throughout the film from her discomfort to that of the nuns as everyone learns to change and adjust to their new friends. The acting is done well and I can picture someone ending up having to hide out in a convent, just not such hilarious results. The plot is well written and you can believe most of it (though the ending is a little far fetched I must say). I really enjoy this movie, still to this day, and as I introduce the kids to movies that I used to watch often, this will be a sure to watch.

The final movie in the Arthur and The Invisibles trilogy.

When Arthur receives a distress call sent from the Minimoys, the invisible people who live in his back garden, he rushes to their aid, ready to fight the evil Emperor Maltazard and save Princess Selenia.

But, what he doesn't know is that the plea for help is all part of Maltazard's evil plan to trick Arthur into entering the Minimoys' ... more...