« Stand By Me review 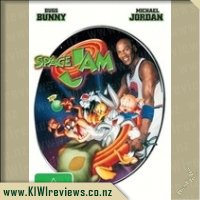 His Airness and His Hareness; what a team! Michael Jordan slams, Bugs Bunny jams and a cavalcade of Looney Tunes and NBA stars hoop it up in the rim-rattlin', out-of-this-world, roundball romp: Space Jam.

I was super crazy about Space Jam when I first watched it, I have no idea how many times I watched it as a kid, but it was Looney Tunes and a fun and easy plot, so it wasn't hard for me to enjoy it at all. Watching it as an adult, it was pretty much one giant advertisement of the Looney Tunes and basketball, especially Michael Jordan, so this wasn't as fun to watch as an adult as it was when I was a kid. In saying that, my kids have watched it a couple of times and enjoyed themselves but they don't watch it often, so it isn't as big a hit with them as it was for me at their age.

The plot is pretty basic, really basic, it has me watching just for nostalgia and not for enjoying the movie itself. The animation is ok but it doesn't really stand the test of time, it looks cheap now, so it doesn't look so good now. The acting is good, the best actors in this though, are the Looney Tunes, they, by far, out act the real life characters, which kind of adds to the amusement of the whole movie. It's OK to watch, as background noise, but not a movie I enjoy anymore.

Score: 9.3
Product reviews for listing 5403: The Fast and The Furious -  Directed by Rob Cohen

Set in the fierce and frenzied world of Los Angeles street racing, where winning is the way to power, The Fast And The Furious is pure fast-paced, adrenaline-fuelled car action.

Paul Walker (from THE SKULLS) stars as a rookie cop who goes undercover, posing as a racing member in Vin Diesel's (from PITCH BLACK) team, in order to investigate a series of hijackings. Walker finds himself in jeopardy, when some of the gang becomes suspicious of him, and he has to choose where his loyalties lie...