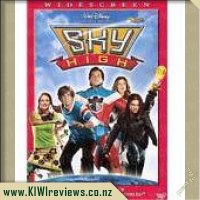 Most teenagers cringe at the thought of meeting their parents' high expectations--good grades, well-behaved friends, and a plan for the future--and none more so than Will Stronghold (Michael Angarano), the son of legendary superheroes Commander (Kurt Russell) and Jetstream (Kelly Preston). This clever Disney comedy follows Will from his first day as star student at Sky High, an elite school for the children of superheroes. The only problem is that Will apparently has no special powers, and he can't let his parents find out! Lacking the abilities needed to attend hero classes, Will falls in with the misfit sidekicks, whose only powers include turning into a guinea pig, glowing, and melting. However, when an old villain with a new power reappears on the scene, the pressure is on Will and his sidekicks to save his parents, his school, and the earth itself.
Perhaps as a tribute to the classic era of teen films, SKY HIGH features a soundtrack bursting with 1980s hits covered by contemporary artists, including Flashlight Brown, Bowling for Soup, and Vitamin C. The film also features performances that will please adult viewers, including a cameo as the school principal by former Wonder Woman Lynda Carter, comedian Dave Foley as a washed up sidekick, and EVIL DEAD star Bruce Campbell as Coach Boomer. Truly fun for all ages, the charming teen stars, fast pace, and universal story make SKY HIGH a clear family classic on par with SIXTEEN CANDLES, SPY KIDS, and NATIONAL LAMPOON'S VACATION.

Being school holidays we are watching a movie each night for the kids and this is one we watched tonight. I started the movie thinking it was going to be just another super hero movie and was surprised to see how wrong I was.

The special effects were great and the imagination used by the writers with what the super powers can be is really good, I mean there were the usual super strength and super speed and x ray vision but there was also glow in the dark, shape shifting into a very small animal and the abilities with plants and being told they are the side kick but they know that they are important.

The super villain is not apparent in the beginning and when revealed it is quite a shock. You sort of get the plan but you don't get the full extent of the plan until home coming. I'm glad that good and bad balanced out and that the villains didn't get there own way.

The kids loved the movie and told me afterwards who their favourite super hero was and why and what part of the movie was the best, even if the answer was the whole movie was great. They also discussed what super powers they would like to have.

I will be buying this movie on DVD as it was so popular with the kids.

I've owned this movie for a couple of years now, I'd seen it cheap on sale and thought that at the price it was on sale for, it wouldn't be too much of a waste if we didn't enjoy it. Well fast forward to a couple of years later and I still own it, so you can say it was a plus. My kids have watched it a couple of times and rather enjoyed it, so tonight I popped it on for our nightly holiday movie as the family staying with us hadn't seen it. My son happily sat down saying that he really likes the girl who can so stuff with plants, so that was great to hear. All through the movie there was lots of laughter and a few questions through the film.

The plot revolves around Will, his parents are the two most famous superheroes so naturally big things are expected of him, but he slowly learns that being a superhero isn't any better or worse than being a "hero support" aka sidekick and that becoming a hero shouldn't stop you from being yourself. The plot is lots of fun, gives different abilities and shows how human they are as teenagers and that life isn't really all the different for them as it is for someone with no abilities.

Ben "Finn" Finnegan is an affable, modern-day treasure hunter who is obsessed with finding the legendary 18th century Queen's Dowry - 40 chests of priceless treasure that was lost at sea in 1715. In his quest, Finn has sunk everything he has, including his marriage to Tess. Just as Tess has begun to rebuild her life, working aboard a mega-yacht ... more...