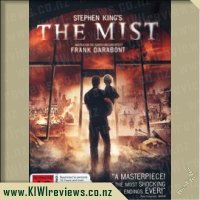 In this legendary tale of terror from master storyteller Stephen King, David Drayton and his young son Billy are among a large group of terrified townspeople trapped in a local grocery store by a strange, otherworldly mist. David is the first to realize that there are things lurking in the mistâ¦ deadly, horrifying thingsâ¦ creatures not of this world.

Survival depends on everybody in the store pulling togetherâ¦ but is that possible, given human nature? As reason crumbles in the face of fear and panic, David begins to wonder what terrifies him more: the monsters in the mist - or the ones inside the store, the human kind, the people that until now had been his friends and neighbors?

I didn't really used be a horror movie person, and whilst I am fine with them now, this wasn't top of my list a few years ago, but due to my husband we gave it a watch.

The Mist takes place in a nice little town, we see a man on his way into town with his son, everyday life in this town and a little curiosity as the local soldiers start to act a bit funny. Slowly a fog rolls in and soon they discover that there is something, quite a few somethings, and these somethings are picking off the inhabitants one by one. Stuck in the grocery store with a few locals, including one very god fearing woman, we see the dynamics shift and change as people try to stay alive.

I found this movie interesting and well done by how it dealt with the dynamics in the group of survivors and how things shift and change, the clashing personalities and trying to work out who should be in charge. The special effects were well done, though we don't see a huge amount, most of it is left to our imagination which adds to the spooky vibe of it. I felt the ending to be rather cliched though rather sad and would have been happy with a different ending. A good film if you like Stephen King.

Woody (Tom Hanks) is stolen from his home by toy dealer Al McWhiggin (Wayne Knight), leaving Buzz Lightyear (Tim Allen) and the rest of the gang to try to rescue him. But when Woody discovers that he's actually a valuable collectible from a once-popular television show called "Woody's Roundup" and is reunited with his horse Bullseye, Jessie the yodeling cowgirl (Joan Cusack) and his faithful sidekick, Stinky Pete the Prospector (Kelsey Grammer), he doesn't want to leave.