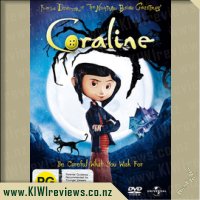 Coraline is a 2009 American stop-motion animation fantasy film based on Neil Gaiman's 2002 n­ovel.

From the visionary director of THE NIGHTMARE BEFORE CHRISTMAS, and based on Neil Gaiman's best-selling book, comes this spectacular stop-motion animated adventure! Coraline Jones (Dakota Fanning) is bored until she finds a secret door and discovers an alternate, better version of her life on the other side. When this seemingly perfect world turns dangerous, Coraline must use her resourcefulness, determination and bravery to save her family.

Such a good movie, this is one of my favourites to be honest. It does have some more scary scenes so I don't think it's suitable for small children unless you know your own kids are fine with that. I'd recommend watching it first before you let the kids watch.
Coraline is a bright child who has two pretty busy parents who don't pay the hugest amount of attention to her. They move into a new house and she is left to her own devices. There is a neighbourhood boy that she doesn't really like and he brings her a doll that looks just like her, towards the end we learn that this toy is a secret spy for her 'other mother'. She finds a secret door hidden in the lounge behind the wallpaper. Behind this door is her 'other' family. A mum and dad who look just the same as her own but they are so much more focused on Coraline and her needs. They do have buttons for eyes, but she overlooks that and enjoys all the nice dinners and adventures to be found. Eventually she learns that this other world comes at a price and the grass is definitely not greener. She has to risk her life and go on a journey to rescue her real and now kidnapped parents. I think it's a fun and unique story. I highly recommend it.
This movie does make you think a bit, obviously something as far fetched won't happen in real life but it is good to give your children that quality time even when you are super busy with other things.

The kids had gotten a movie they'd wanted on DVD and this was one of the trailers that was on the disc, so the first I heard about it was from my son wanting me to see if we could get the movie about the mum who has button eyes. Suffice to say this had me curious, we borrowed the movie and went on to own it.

Coraline has recently moved into a new home and starts to notice odd things, one night she crawls through a little door and discovers herself in her house, yet it isn't her house, here things are similar but undeniably different, starting from her "other" parents who have buttons for eyes! What starts off as something new to explore and perhaps a better family soon turns into one heck of an adventure and Coraline discovers that everything is not quite as it seems.

My daughter was a bit scared of this movie the first time she saw this but the next time she watched it she was laughing and loving it. My son is a huge fan of Coraline and has watched it so many times he knows exactly what is going to happen next. This has been a hit in this house, I myself am particularly a fan of the animation style, I love the work that goes into it and it ends up looking rather wonderful.

Emboldened by the return of Lord Voldemort, the Death Eaters are wreaking havoc in both the Muggle and wizarding worlds and Hogwarts is no longer the safe haven it once was. Harry suspects that new dangers may lie within the castle, but Dumbledore is more intent upon preparing him for the final battle that he knows is fast approaching. He needs Harry to help him uncover a vital key to unlocking Voldemort's defences, critical information ... more...