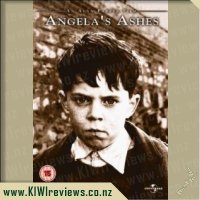 Based on the best selling autobiography by Irish expat Frank McCourt, Angela's Ashes follows the experiences of young Frankie and his family as they try against all odds to escape the poverty endemic in the slums of pre-war Limerick. The film opens with the family in Brooklyn, but following the death of one of Frankie's siblings, they return home, only to find the situation there even worse. Prejudice against Frankie's Northern Irish father makes his search for employment in the Republic difficult despite his having fought for the IRA, and when he does find money, he spends the money on drink.

My Irish friend is responsible for me watching this movie as well, the story sounded rather good, you follow a family as they live life. I remember thinking that it was a strange thing to do, a lot of Irish families were leaving Ireland for countries like America but this family was doing this backwards, they were living in Boston and decided to go back to Ireland and one of the comments by the young Frank was that his was the only family that was leaving to go back to Ireland.

You see how the family struggled as they were expecting things to be better once they were in Ireland but things were a lot worse, the family being the mum and kids have to move in with an uncle to survive but one scene you realise what Angela has to do to put a roof over the kids heads, you don't actually see anything but you can tell by the sounds and the comments from the kids.

The movie is based on a book by Frank McCourt and I understand that he had a lot to do with how the movie was done so that is good. I can't imagine being in that situation but the movie shows how some people would cope and I'm glad that I am not in that situation. They show how the family waited for the father to send the money he was supposed to be earning and how they had to go without when nothing arrived from the father and how the father was spending his money, makes me want to hit him.

I would love to own this on DVD as it shows that life could always be worse. A movie well done

However, when he meets Marianne (Evan Rachel Wood), a feisty fairy princess whose heart was broken by a philandering fiance, he begins to change his mind.

Meanwhile, an elf named Sunny (Elijah Kelley) makes his way to the Dark Forest to collect enough primrose petals for a potion of his own.