The Leftovers: Season One review 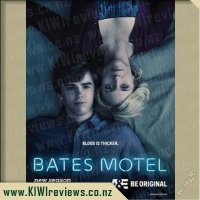 Bates Motel has vacancies and welcomes you for a second season, starring Academy Award nominated actress Vera Farmiga and Freddie Highmore. In the aftermath of Miss Watson's murder, Norman's (Highmore) innocence is buried under blackouts, suspicious characters, and his strange behavior.

Meanwhile, Norma (Farmiga) faces dark truths of her own when family secrets begin to unravel and looming threats from local villains jeopardize Norma's stab at happiness. No matter where you turn - there's no escaping what bubbles beneath the surface in White Pine Bay.

Cosentino: The Magic, The Mystery, The Madness
Rating: 9.3

I had been hooked on season one and was really excited when SoHo played season two right after season one finished, so there was no waiting to see what was going to happen.

We pick up right where we left off, but only for a couple of minutes before skipping ahead four months. In the previous season we had a lot going on with the two rival drug leaders and this season is no less than the previous. Not only do we have the big 'war' going on but we have the struggle between mother and son and then there is a big revelation about Norma's past which could splinter the family further.

The acting in this is top notch, Highmore is brilliant in his role as Norman, perfectly naive but when the moment calls for it he is definitely psychotic and not someone that you would want to run into on a bad day, that's for sure. Farmiga is wonderful in her role as Norma, there is that perfect mixture of someone who doesn't yet quite know who's who and what's what (ie. taking the help offered to here and then thinking she doesn't have to do anything in return...) yet struggling to maintain control in her life.

I really enjoyed this season and I'm looking forward to season three.

The only way forward is to go back.

The only way forward is to go back. It's a new series with new characters, new clones and new secrets...and time to go back to the very beginning. The genesis of the Orphan Black universe holds the key to its future. In the profoundly surprising mystery that unfolds throughout Series 4, the stakes are raised, everything is up for grabs and the clones will learn no-one is to be trusted--friends ... more...