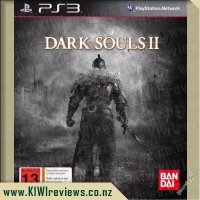 Built upon the foundation established by Souls series creator and Dark Souls II Supervisor, Hidetaka Miyazaki, with development helmed by FromSoftware Director Tomohiro Shibuya, Dark Souls II will feature a new hero, a new storyline, and an unfamiliar world for players to survive in, while delivering the uncompromising challenge and ultimate sense of empowerment that players hunger for.

Epic battles with gruesome enemies and blood-thirsty bosses await adventurers as they traverse and conquer a devastated world filled with death and despair. Players will also discover a revamped server based multiplayer experience that will put a distinct Dark Souls II twist on the concept of playing and sharing with others. For those with enough tenacity and sheer force of will, great rewards await.

To say that I like this series would be a bit of an understatement. I would have to say that all in all they are three of my all time favourite games.

That said I think this is one of the best games out today. The graphics are amazing and you often get a feeling akin to awe when you come to a particularly sweeping vista or massive cavern. There is a sense of grittiness about the game that I find compelling and there really is something about a game that, right from the start, sets out to kill you, and succeeds more often than not.

I'm not saying that this game isn't extremely frustrating at times as it clearly is, but the truly compelling thing about it is the challenge.

When you first start playing the game you get to choose some basic attributes for your character followed by a basic tutorial after which you're on your own. You soon get used to dying. There's a very 'take no prisoners' approach to the save system where your only save points are bonfires throughout the game. Between each bonfire there are a very large number of increasingly difficult enemies. This means that you may spend a long frustrating time trying to defeat a particularly difficult enemy or group of enemies only to get killed moments after succeeding and having to go through it all again. To some this may sound like a nightmare but to me the greater challenge makes it so much sweeter when you finally make that next bonfire.

Sprinkled through the game are a collection of NPCs who are there in some cases to provide goods (weapons, armour etc.) or services (repairing equipment etc.) Goods and services are paid for with souls which are collected by defeating enemies or finding certain items around the world (usually found on the bodies of the fallen.)

The only downside I've found so far is more of an unfavourable comparison to the previous games in the series. I've noticed that once you've defeated enemies a certain number of times they stop spawning when you return to the area. This may have been to avoid players being able to grind for souls but to me it just seems to lower the challenge involved which is kind of the point.

All up this is an excellent game and has kept me up a couple of nights since I got it for Christmas. I'd say it's definitely worth the price.

More monsters, puzzles, costumes, suspects and friends await Mystery Inc. on this all new adventure! Join Scooby, Shaggy, Daphne, Velma, and Fred as they journey through a spooky swamp and other haunted locales to uncover the mystery of a strange swamp girl and her cauldron of brew.