« Terminator 3: Rise of the Machines review 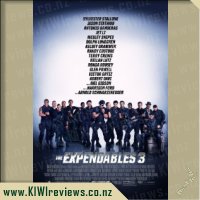 Barney (Stallone), Christmas (Statham) and the rest of the team comes face-to-face with Conrad Stonebanks (Gibson), who years ago co-founded The Expendables with Barney.

Stonebanks subsequently became a ruthless arms trader and someone who Barney was forced to kill... or so he thought.

Stonebanks, who eluded death once before, now is making it his mission to end The Expendables -- but Barney has other plans. Barney decides that he has to fight old blood with new blood, and brings in a new era of Expendables team members, recruiting individuals who are younger, faster and more tech-savvy. The latest mission becomes a clash of classic old-school style versus high-tech expertise in the Expendables' most personal battle yet. I wasn't really too sure what to expect with this film. Couldn't even see who all the actors were on the movie poster because there were so many of them, that they were really small. Unlike the previous film, I didn't even know who some of the newer additions were this time around, which in my eyes defeats the purpose of the film.

In terms of action, Expendables 3 jumps straight into it from the get-go, and goes straight from one action-packed scenario into another. The use of Parkour was exhibited in this film which captured my interest, but unfortunately it wasn't used to it's full potential. This film features a new young Expendables crew, as well as an older but limited "foundation" Expendables crew. While it was nice to get some fresh blood, I couldn't help question why it was done the way that it was; it felt like the more established character and actors didn't want to invest much time in the film, so the script was altered to minimise how much they were needed.

It pretty much switched between so many characters, with very few scenes requiring all actors (or actress) in the same shot, that it felt like it wasn't a proper team effort, and left it feeling ingenuine.

I honestly was expecting better. The opening scenes had my interest, and gave me high hopes, but the standards of quality dropped consistently throughout the film. Antonio Banderas was another actor that I really felt could have been a great attribute to the film (initialling showing great agility and parkour skills) but again, nothing came from it, instead his character development involved nothing but incessantly high pitched talking.

All in all though, I watched the entire thing. I poked holes in the plot and action scenes, but I still watched it all, and I will watch the 4th installment if they make one. Maybe it's just nostalgia for old action with guns blazing, or maybe just nice to see all of these actors on an even playing field, but I'd still watch it again.

Wow this movie is incredible. Sharp Shooters everywhere need to watch this. The bullets are flying and only the bad guys get hit. Even Mel Gibson (the really bad guy) says 'how hard is it to hit 10 guys, even wound them a little' seriously there is like a couple hundred bad guys and only Sly, Jason and the crew manage to hit anyone. There bullets are magical the way they fly through the air and always hit there mark.

Okay so I knew the movie was not brain surgery worthy but I would of liked a little bit of realism involved in the movie. I have watched the other two and really enjoyed them but this one lacked something. It was really slow and boring and even the action scenes just did not hit the mark. For a movie with so much potential it was a dead duck.

If I did not know better I would say Harrison Ford can not act. It was terrible he was so wooden and not at least convincing. Even Mel Gibson was flat. Sylvester is looking way to old and the rest of the cast did not fear better. I was glad they brought in a younger crew but they did not really get the screen time instead it was basically Sylvester trying to act. Oh and Antonio Banderas pleading to be taken seriously which made my husband loose total respect for him.

It is fair to say I really was not impressed by this third instalment at all. I had a couple of chuckles and the rest of the time I was looking at the clock. I paused it early on to make dessert for my husband and myself and he asked me 'why what do you possibly think your going to miss' it was just so slow and really uneventful.

For so many big names it sure was a BIG disappointment. I think some of these guys need to face the reality that there time is up and action movies no longer have their names written on the script. Or if they want to keep embarrassing themselves come up with a way better story.

Score: 9.3
Product reviews for listing 1858: Into the Wild
Directed by Sean Penn

Into the Wild is inspired by the true story of Christopher McCandless, a young man who abandons his life of comfort to pursue the freedom of life on the road, a quest that leads him to the Alaskan wilderness and the ultimate challenge of his life.