ProdID: 6011 - Terminator 3: Rise of the Machines
Directed by Jonathan Mostow 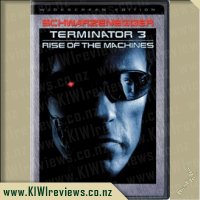 Now 25, Connor (Nick Stahl) lives with no record of his existence -- no way he can be traced by Skynet. Out of the shadows of the future steps the T-X (Kristanna Loken), Skynet's most sophisticated cyborg killing machine yet. Now Connor's only hope for survival is the Terminator (Arnold Schwarzenegger), his mysterious former assassin. Together, they must triumph over the technologically superior T-X and forestall the looming threat of Judgment Day. The first film had a solid metal terminator, the second film had a liquid terminator. What is in the third? A gaseous terminator? Nope (though that would be kick-ass) we have a metal/liquid hybrid. Not only that, but we have a female terminator. The benefits of a female terminator are rather limited; perhaps an increase in agility from the smaller frame, and an increased charm that she can use to get close to people, but largely, terminators aren't subtle sneaky creatures in this film. They are loud, obnoxious, kill everything that moves creatures, so I'm surprised that they even bother with the fleshy covering.

But I'm getting far off track now. This film finally brings on judgement day, which is awesome. That's the part that I want to see more of; humans fighting against robots (or cybernetic organisms). We see it only as flash..forwards(?) as the film follows the last effort to prevent judgement day.

The CGI in this film is great, and even though I found myself questioning how a robot can wirelessly control vehicles that don't have any form of wifi connection, it creates great action scenes, that gives the illusion of multiple enemies, which has always been the limiting factor of these films. There has always been only one enemy. The thing that is scary about this film, is how close our technology is to actually being able to do what is portrayed in this film. With most devices having wireless connections, they can easily be infected by a self-aware AI, and with the internet, it could quite easily go worldwide.

Kristanna Loken does a great job as a conscience-less killing machine, and Arnie does great as always with his "unintended" quips and comebacks, but Nick Stahl was a let down (No wonder Christian Bale got cast in the fourth film)

Based on his play by the same name, Neil LaBute's script follows a successful writer (Adam Brody) who, on the eve of his wedding, travels across the country to meet up with ex-lovers in an attempt to make amends for past relationship transgressions.